What do breast cancer cells feel inside the tumour? 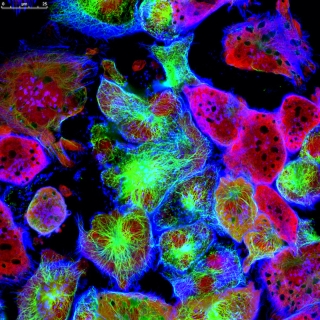 Using a new technique, a team of McGill University researchers has found tiny and previously undetectable ‘hot spots’ of extremely high stiffness inside aggressive and invasive breast cancer tumours. Their findings suggest, for the first time, that only very tiny regions of a tumor need to stiffen for metastasis to take place. Though still in its infancy, the researchers believe that their technique may prove useful in detecting and mapping the progression of aggressive cancers.

“We are now able to see these features because our approach allows us to take measurements within living, intact, 3D tissues,” says Chris Moraes, from McGill University’s Department of Chemical Engineering, a Canada Research Chair and senior author on a recent research paper in Nature Communications. “When tissue samples are disrupted in any way, as is normally required with standard techniques, signs of these ‘hot spots’ are eliminated.”

The researchers built tiny hydrogel sensors that can expand on demand, much like inflating balloons the size of individual cells, and placed them inside 3D cultures and mouse models of breast cancer. When triggered, the expansion of the hydrogel can be used to measure very local stiffness inside the tumour.
This unusual technique, developed through a collaboration between McGill’s Department of Chemical Engineering and the Rosalind and Morris Goodman Cancer Research Centre at McGill, allows the researchers to sense, from the perspective of a cancer cell, what is going on in their surrounding environment.

What cells sense drives their behaviour

The researchers believe that their findings suggest new ways in which cell mechanics, even at the early stages of breast cancer, might affect disease progression.
“Developing methods to analyze the mechanical profiles in 3D tissues may better predict patient risk and outcome,” says Stephanie Mok, the first author on the paper and a PhD candidate in the Department of Chemical Engineering. “Whether these ‘hot spots’ of stiffness are really causing cancer progression rather than simply being correlated with it remains an open, but critically important question to resolve.”