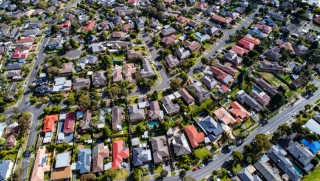 New research from McGill University and the University of California, Santa Cruz has found that the local streets of the world’s cities are becoming less connected, a global trend that is driving urban sprawl and discouraging the use of public transportation.

The new study published in Proceedings of the National Academy of Sciences is the first global history of sprawl as measured by local connectivity of street networks. The research relied on publicly available data sourced from OpenStreetMap, the Wikipedia of maps, and satellite-derived data.

“We wanted to take a systematic approach that identifies cities—which might not be household names beyond their country’s borders—where sprawl is rapidly worsening,” said co-author Christopher Barrington-Leigh, an associate professor at McGill’s Institute for Health and Social Policy. “We also wanted to identify the cities that, often with little fanfare, have been working to grow in an efficient, connected pattern for decades.”

The result of a 7 year collaboration, the study was able to show that in large parts of the world, recent urban growth has increasingly resulted in inflexible and disconnected street networks. Different forms of gated communities were also found to be on the rise globally.

Barrington-Leigh and collaborator Adam Millard-Ball, an associate professor in the Environmental Studies Department at the University of California Santa Cruz, built a Street-Network Disconnectedness Index to create a global street connectivity map. Their data showed that southeast Asia is now home to some of the most sprawling cities on the planet – and sprawl is getting worse. Gridded street networks, on the other hand, promote efficient, dense urban form in Bolivia, Argentina and Peru. Germany, Denmark and the UK have been able to maintain moderate levels of street connectivity thanks to pedestrian and bicycle pathways, offering greater connectivity to non-motorized travel.

In conjunction with the study’s publication, the authors are launching an online interactive map through which visitors can explore street connectivity around the world. The web site can also be used for making animations showing how street connectivity has changed in a given area.

Past research has shown that the increased accessibility offered by gridded street networks makes walking, cycling and the use of public transit much simpler while cul-de-sacs tend to encourage the use of personal motorized vehicles. Barrington-Leigh said urban planners thus need to think about connectivity at the most local scale when designing and planning new streets in order to make cities more sustainable.

“Streets and roads represent an essentially permanent backbone that shapes all other dimensions of urban form and land use,” he said. “Policy makers should look to cities like Tokyo and Buenos Aires for inspiration on how to limit sprawl. On our current path, choices that limit street connectivity may restrict future resilience and lock in pathways of energy use, CO2 emissions, health outcomes, and other aspects of our lifestyle for a century or more.”

The methodology used to build the connectivity index and maps is described in a paper previously published in PLOS.

“Global trends towards urban street-network sprawl” by Christopher Barrington-Leigh and Adam Millard-Ball was published in the Proceedings of the National Academy of Sciences.