Sex, drugs, and rock & roll chemistry in the brain 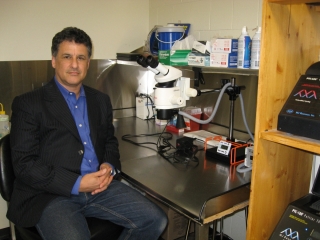 The same brain-chemical system that mediates feelings of pleasure from sex, recreational drugs, and food is also critical to experiencing musical pleasure, according to a study by McGill University researchers published today in the Nature journal Scientific Reports.

“This is the first demonstration that the brain's own opioids are directly involved in musical pleasure,” says cognitive psychologist Daniel Levitin, senior author of the paper. While previous work by Levitin’s lab and others had used neuroimaging to map areas of the brain that are active during moments of musical pleasure, scientists were able only to infer the involvement of the opioid system.

In the new study, Levitin’s team at McGill selectively and temporarily blocked opioids in the brain using naltrexone, a widely prescribed drug for treating addiction disorders. The researchers then measured participants’ responses to music, and found that even the participants’ favorite songs no longer elicited feelings of pleasure.

“The findings, themselves, were what we hypothesized,” Levitin says. “But the anecdotes -- the impressions our participants shared with us after the experiment -- were fascinating. One said: ‘I know this is my favorite song but it doesn't feel like it usually does.’ Another: ‘It sounds pretty, but it's not doing anything for me.’”

Things that people enjoy – alcohol, sex, a friendly game of poker, to name a few – can also lead to addictive behaviors that can harm lives and relationships. So understanding the neurochemical roots of pleasure has been an important part of neuroscience research for decades. But scientists only recently developed the tools and methods to do such research in humans.

Still, this study proved to be “the most involved, difficult and Sisyphean task our lab has undertaken in 20 years of research,” Levitin says. “Anytime you give prescription drugs to college students who don’t need them for health reasons, you have to be very careful to ensure against any possible ill effects.” For example, all 17 participants were required to have had a blood test within the year preceding the experiment, to ensure they didn’t have any conditions that would be made worse by the drug.

Music’s universality and its ability to deeply affect emotions suggest an evolutionary origin, and the new findings “add to the growing body of evidence for the evolutionary biological substrates of music,” the researchers write.

This work was supported by funding from the Natural Sciences and Engineering Research Council of Canada.