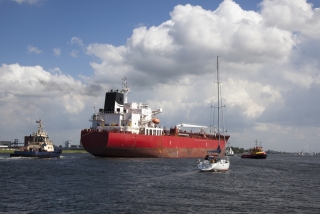 Rising global maritime traffic could lead to sharp increases in invasive species around the world over the next 30 years, according to a new study by McGill University researchers.

The findings, published in the journal Nature Sustainability, suggest that shipping growth will far outweigh climate change in the spread of non-indigenous pests to new environments in coming decades.

“Biological invasions are believed to be a major driver of biodiversity change, and cause billions of dollars in economic damages annually,” says senior author Brian Leung, an associate professor in McGill’s Department of Biology and School of Environment. “Our models show that the emerging global shipping network could yield a three-fold to 20-fold increase in global marine invasion risk between now and 2050.”

Shipping accounts for 80% of world trade, and an estimated 60% to 90% of marine bio-invasions. In some cases, ships transport living organisms through ballast water, which is taken up to stabilize the vessel. In others, species hitch a ride to new environments by attaching to the hulls of ships.

“To understand how biological invasions will change, we need to understand how shipping patterns could change,” says lead author Anthony Sardain, a graduate student in Leung’s lab at McGill. “Our study suggests that, unless appropriate action is taken, we could anticipate an exponential increase in such invasions, with potentially huge economic and ecological consequences.”

Fortunately, the costs of biological invasions are being recognized, with major policy initiatives such as the international Ballast Water Management Convention put in place recently, the researchers note. The Convention, which entered into force in 2017, represents the latest global effort to control bio-invasions through measures such as ballast exchange – a method that has been effective at reducing invasion rates in the Great Lakes of North America. “While it’s too early to gauge the efficacy of the Convention globally, our work suggests it is in the right direction,” Leung says.

To project rates of global shipping traffic growth, and the consequences for biological invasions, the researchers built computer models using socioeconomic-growth scenarios developed as part of the United Nations’ Intergovernmental Panel on Climate Change (IPCC). As wealth and population increase, so too does demand for goods and services that aren’t available locally. The wide range for increases in bio-invasion risk estimated by the models – anywhere from three-fold to 20-fold – stemmed from uncertainty in the underlying socioeconomic trajectories.

“Despite this large range, all scenarios point to an increase in both shipping and invasions,” Sardain notes. “That should alert us to the gravity of the situation, and the importance of measures to curtail biological invasions.”

Prof. Brian Leung
UNESCO Chair for Dialogues on Sustainability
Department of Biology and the McGill School of Environment
McGill University
brian.leung2 [at] mcgill.ca