Rewriting our understanding of gastric tumours 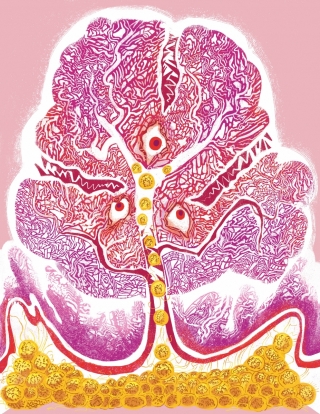 The immune system can be an important ally in the fight against cancer. A study from McGill scientists published today in Science suggests that the reverse may also be true – that abnormal inflammation triggered by the immune system may underlie the development of stomach tumours in patients with a hereditary cancer syndrome known as Peutz-Jeghers Syndrome (PJS). The findings are likely to prompt a re-thinking of how gastric tumours form in patients with this syndrome and in others with gastrointestinal cancers. They should also open the door to potential new treatments based on targeting inflammation rather than tumour cells.

Peutz-Jeghers Syndrome (PJS) is a rare genetic disorder that affects approximately 1 in 150,000 people worldwide. PJS is caused by a mutant, inactive version of a gene (STK11/LKB1) that acts as a tumour suppressor and regulator of cell growth, metabolism, survival and polarity (the way the different elements in the cell are organized). Initial signs of the disease are the development of dark blue or brown freckles around people’s mouths, eyes, and nostrils. Patients also develop benign polyps – masses of cells that form on the inside lining of their stomach and their digestive tract.

By the age of 65, those with the syndrome have a greater than 90 percent chance of developing cancer, including pancreatic, stomach, ovarian, cervical, colon or breast cancer. There is currently no cure for PJS. Patients are monitored for cancer development and often require surgery to remove polyps to prevent intestinal blockage and bleeding.

Researchers looking for a cure for PJS have long focused on the role that the STK11 gene plays in the epithelial cells of the gastrointestinal tract where polyps, and eventually tumours, form. But a serendipitous discovery in mice led McGill-based researchers to turn their attention in a completely different direction – the immune system.

A new focus on the immune system

Dr. Julianna Blagih, who was studying the role of STK11/LKB1 in immune cells as part of her Ph.D. thesis at McGill, observed that mice with disruption of the STK11 gene only in T cells – soldiers of the immune system that protect our bodies from infection – developed gastrointestinal tumours similar to those found in people with PJS. This observation led Dr. Blagih and her Ph.D. supervisor, Dr. Russell Jones, to explore how immune cells may contribute to development of the disease.

“This is a great example of how a random discovery in fundamental science in the lab can lead to new ideas about how diseases are caused, and potentially also to new treatments,” said Dr. Jones, corresponding author of the study and Associate Professor in the Department of Physiology and the Goodman Cancer Research Centre at McGill. “When we investigated further, we confirmed that these were not simply random results and that the mice with T cells with these mutations developed inflammation in their gastrointestinal tract and polyps similar to those in PJS patients.”

Moreover, Dr. Maya Poffenberger, the lead author and a member of Dr. Jones’ research team, discovered that telltale signs of inflammation were found in polyps from human PJS patients. She also found that polyp development could be reduced in genetically-susceptible mice when they were administered medication that interrupted specific inflammatory pathways.

Dr. Jones adds, “Basically, our work changes the way we have been thinking about this disease, with our focus now on understanding how the immune system contributes to polyp development. We hope that our discovery will lead to new treatments for PJS patients and others with gastrointestinal cancers. We’re pretty excited about it.”

Dr. Jones’ next step is to work with mouse models and to continue collaborations with colleagues such as George Zogopoulos and William Foulkes at the McGill University Health Centre (MUHC) to study in patients the role of inflammation in the disease.

About the Goodman Cancer Research Centre
The Goodman Cancer Research Centre (GCRC), located within McGill University’s Life Sciences Complex, is a state of the art hub for groundbreaking cancer research that attracts and retains top scientists from around the world.  Originally established in 1978 as the McGill Cancer Centre, the Centre leads scientific advances that enable us to investigate cancer at a genomic, cellular and molecular level, and understand how cancer progresses, spreads and resists therapies. The Centre currently comprises 27 dedicated research teams with cutting-edge technology platforms, research and support staff and over 200 trainees. Research activities at the GCRC represent a first line of defense in the fight against cancer, with focus on fundamental research to understand why cancers fail to respond to treatment and translating findings into new targets and therapies.