The “reality” of accent change 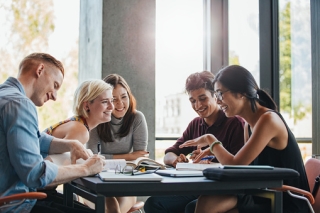 A new study of how accents change over differing periods of time demonstrates the limited impact of intense social interactions in isolated environments, and surprisingly large differences among people in how susceptible their accents are to change. The study “The medium-term dynamics of accents on reality television ", by McGill University linguist Morgan Sonderegger and colleagues Max Bane and Peter Graff is published in the journal Language.

The article explores the extent to which people’s accents can change over time as a result of social interactions. The capacity for accent change among adults has been well-documented by linguistic researchers, over both the short-term (temporarily in the context of a single conversation) and the long-term (slowly evolving based on exposure to other accents over a period of years). In this study, the middle period between the short- and long-terms is documented using the unique experimental environment of a reality television program.

The authors investigated accent dynamics by taking advantage of a “natural experiment”: the reality TV show, Big Brother UK, whose structure is uniquely suited to investigating how and why an individual’s accent changes over the medium term.  Contestants live in an isolated house for three months, are continually recorded, and interact with each other constantly, without access to the outside world; the house is thus a linguistically closed system, where it is possible to both determine the dynamics of contestants’ speech from day-to-day and reason about the sources of any observed changes.

To address these questions, the authors built a dataset of 14.5 hours of speech for 12 contestants from the “diary room” segments of the show, where they are in an isolated room talking to Big Brother.  The linguists transcribed what contestants said and annotated five variable aspects of a speaker’s accent.  Transcription and annotation were added by automatic tools based on machine learning and speech recognition technology, allowing the authors to construct datasets much larger than those used in most work analyzing how people speak — which enabled them to chart fine-grained variability in how people speak, on a day-to-day basis.

The analysis showed that accent change over the medium term is ubiquitous: large daily fluctuations in each sound variable are the norm, while longer-term change over weeks to months occurs in a minority of cases. Their results, along with previous studies, show that the dynamics of accent change over time within individual speakers — even in settings of intense social contact — are highly complex.  The complexity of these dynamics rules out any simple path from social interaction to change in a person’s accent over their lifetime:  despite constant interactions over three months, contestants do not end up all sounding more similar. Instead, the degree of accent change over time can be explained by systematic differences between people and sounds in how subject they are to change over time.

“People differ a lot in how susceptible their accents are to change over months -- we can think of "changers" and "non-changers," Sonderegger says. “This might help explain why some people never 'lose' their accent when they move to a new place, while other people's accents change so completely that people are surprised to learn where they are originally from.”

Funding for the study was provided by SSHRC and FRQSC.

“The medium-term dynamics of accents on reality television", by Morgan Sonderegger, Max Bane and Peter Graff is published in Language. A preprint of the paper can be found at http://people.linguistics.mcgill.ca/~morgan/sonderegger_graff_bane_mediu...