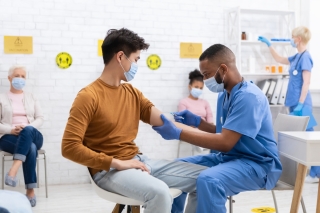 The COVID-19 pandemic has uneven impacts across cities and provinces, with some regions struggling more than others. A new study shows hotspots of COVID-19 infections across Canadian cities are linked to occupation, income, housing, and markers for structural racism.

To better understand the factors contributing to the concentration of infections in specific regions, a team of researchers across Canada, including Yiqing Xia, David Buckeridge, and Mathieu Maheu-Giroux of McGill University, analyzed provincial surveillance data from January 2020 to February 2021. The study, which looked at infections in 16 urban centres in Quebec, Ontario, British Columbia, and Manitoba, is published in the Canadian Medical Association Journal.

Patterns of COVID-19 transmission within cities

“In each of the cities we examined, 50% of cases were concentrated in areas that accounted for less than 21% to 35% of the population. In these regions the factors associated with case concentration varied slightly depending on local contexts,” says McGill University Professor Mathieu Maheu-Giroux, a Canada Research Chair in Population Health Modeling.

“Across all provinces, cases were geographically concentrated along social determinants of health. These include neighborhoods with high-density housing, more essential workers, residents with lower income or educational attainment, and a higher proportion of visible minorities or recent immigrants,” says lead author Yiqing Xia, a McGill PhD student in the Department of Epidemiology, Biostatistics, and Occupational Health.

The researchers found that the most common social determinant of health across all cities was visible minority status. These findings are consistent with other studies from Canada as well as Sweden, the United States, and other countries showing higher rates of COVID-19 in vulnerable communities or diverse neighbourhoods.

“What is striking in our analyses, is that we observe similar patterns in all the Quebec cities examined: cases are concentrated along social determinants of health in Gatineau, Quebec City, Sherbrooke, Saguenay, and Trois-Rivières,” says Mathieu Maheu-Giroux.

“In Montreal, the local Direction régionale de santé publique has at times prioritized some interventions like testing and vaccines to specific areas of the city that experienced high COVID-19 transmission. There is a need to scale-up these initiatives to make our pandemic response more efficient,” he adds.

Focusing on populations at greater risk of infection

“Understanding the factors associated with geographic patterns of transmission within cities can help identify the populations and, specifically, the contexts with the greatest risks,” says Dr. Sharmistha Mishra of St. Michael’s Hospital and Unity Health Toronto. “Geographic analyses can enable better allocation of resources, tailoring of policies and implementation of context-specific strategies to more effectively and efficiently curb local transmission,” she says.

To effectively reach and meet the prevention and care needs of communities at disproportionate risk of COVID, the authors call for geographically prioritized public health supports for hotspots across the country, like vaccination rollouts and testing in specific areas. “Prioritizing specific neighbourhoods that are most at risk of transmission offers a clear path forward in the public health response to COVID-19’s resurgence,” they conclude.