Plugged in but powered down 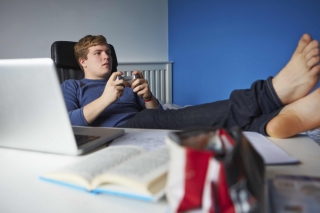 It’s not news that being a couch potato is bad for your health. Lack of physical activity is associated with a range of diseases from diabetes to heart attacks. It now turns out that young men who have experienced depression early on may be especially vulnerable to becoming sedentary later in life. And particularly to spending large amounts of time online each day.

A study of 761 adults in Montreal who were identified at the age of 20 as suffering from the symptoms of depression (in 2007-08) were asked by researchers to keep track of how much leisure time they spent in front of a TV or a computer screen (playing games or using the internet) four years later on (in 2011-12) when they were 24. What the researchers discovered were some striking differences between young men and young women.

“We started out with the idea that early depression might later turn everyone into couch potatoes, just sitting around glued to the TV or a computer screen,” says Dr. Nancy Low, of McGill’s Dept. of Psychiatry and one of the authors of the study. “But what we didn’t expect was to see such a clear difference between what men and women were doing.”

The researchers found that young men on average spent about four hours more online or watching TV each week than young women did. But also that the total number of hours spent in front of a screen, whether it was the computer or the TV, was over 21 hours per week or over three hours a day. This is more than twice the level of screen-time recommended by the Canadian Society for Exercise Physiology for children and adolescents.

The researchers found this information particularly disturbing for two reasons: sedentary behavior is on the rise among the young and influences later behavior; also, because young people weren’t asked about their use of cell/smart-phones and tablets or the time that they spent reading, the researchers believe that they may be spending even more time being sedentary than these figures suggest.

The next step for the researchers will be to see how this online time is being spent by both men and women, since they believe that it is likely that young women are using the computer mainly for social interactions and communications (activities that will help them deal with depression), while men are spending more time in non-social interactions such as game-playing or checking the news (activities which may help them avoid the problem).

“This study signals that young men who have been depressed are more likely than young women to become trapped in a vicious cycle where depression later leads to more sedentary behavior which in turn may contribute to later health problems that also include depression.” says Dr. Low. “What we need to do is figure out how best to intervene early in the process. And one of the things we’re looking into now is how that online time, and things like mobile apps, can best be used to help young people deal with their depression and become more physically active.”