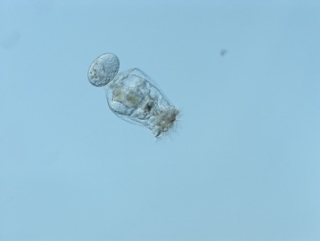 How can predators coexist with their prey over long periods without the predators completely depleting the resource that keeps them alive? Experiments performed over a period of 10 years by researchers from McGill University and the Universities of Oldenburg and Potsdam have now confirmed that regular oscillations in predator-prey populations can persist over very long periods

“Because predators eat their prey there is always a danger that they perish after killing off the resource that kept them alive,” says Gregor Fussmann, professor in McGill’s Department of Biology and co-senior author of the new study published in Nature. “Yet, if predators are a bit less efficient, prey populations may be able to recover while predator numbers dwindle. This process can lead to potentially endless predator-prey cycles.”

The researchers used a microbial predator and prey system to try and understand if these predator-prey population cycles occur naturally through the interaction of the two species or if they are the result of external drivers.

Predator-prey cycles are based on a feeding relationship between two species: if the prey species rapidly multiplies, the number of predators increases - until the predators eventually eat so many prey that the prey population dwindles again. Soon afterwards, predator numbers likewise decrease due to starvation. This in turn leads to a rapid increase in the prey population – and a new cycle begins.

To confirm these dynamics, the researchers kept plankton in glass vessels under highly controlled conditions - constant temperature – and used rotifers, which feed on algal cells, as predators. The oscillations in rotifer and unicellular algae populations were measured across 50 cycles and more than 300 predator generations - a record for a study of this kind.

“Our experiments confirm the theoretical concept of self-generated predator-prey cycles," says Bernd Blasius, lead author of the new study and head of the Mathematical Modelling group at the University of Oldenburg’s Institute for Chemistry and Biology of the Marine Environment. “We mainly observed regular oscillations in the predator and prey populations recurring at almost constant intervals. Unexpectedly, these regular oscillations were repeatedly interrupted by short, irregular periods without any discernible external influences and then independently returned to the original state.”

“Our ability to understand the dynamic behaviour of natural ecosystems largely relies on the correctness of very simple theoretical assumptions – including those about how predator-prey cycles arise,” Fussmann said. “Our work gives assurance that we are using the right building blocks when we attempt to predict what is happening in complex ecosystems.”

The experimental work was performed at the University of Potsdam, where the research team had already measured how external factors can influence population cycles by periodically changing the nutrient supply of the algae. The researchers would now like to explore how other factors occurring in real ecosystems – such as changing temperature – affect predator-prey cycles.

This work received financial support from the German VW-Stiftung.