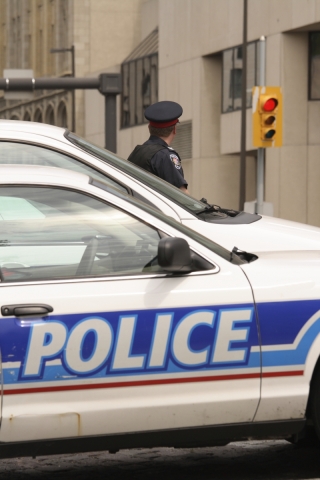 Canadian cities that have significant visible minority and Aboriginal populations have bigger police forces than those without. No matter what the actual level of crime.

A map showing police presence by city and federal imprisonment by province.

Provinces where there is a sizeable presence of Aboriginal people, and to a lesser extent, of people from visible minorities, also tend to send more people to federal prisons.

This was the conclusion reached by McGill sociologist, Jason Carmichael, and his graduate students when they looked at a number of factors that could potentially influence both police force size and the numbers that provinces send to federal prisons each year. (Any crime with a sentence of over two years leads a prisoner to a federal prison rather than a provincial one.)

In a couple of papers published recently in Sociological Inquiry and the International Criminal Justice Review, the researchers used statistical tools to analyse the relative importance of things such as: the levels of crime in particular cities and provinces; the political stripe of the government in power; income inequality (potentially the cause for citizens to have a greater need to feel “protected”); the percentage of poor or unemployed; the number of single parent families; and the level of social disorganization (young unsupervised people in the streets whose behaviour might lead to calls for police intervention, but not criminal charges).

When they looked at the size of municipal police departments in the 40 largest cities in Canada between 1996 and 2006, the researchers discovered that cities with more visible minorities have larger police departments after crime rates, budget issues, and the population are accounted for. In fact, standardized statistical tests suggest that the presence of visible minorities in a city is by far the most significant predictor of police force size across Canadian cities. Quebec covered both ends of the spectrum.

In Montreal, a city with a visibly mixed population, there were over 235 police for every 100,000 members of the population for 2006. The highest ratio of police to resident to be found in any large city in the country. In Lévis, a fairly homogeneous suburb of Québec City,on the other hand, there were only 87 police for 100,000 people in the same year.

“Even after accounting for crime and population differences, provincial variations in prison admissions were driven largely by the size of the visible minorities and Aboriginal populations. Or, to put it differently, prison admission rates are largely driven by a sense of ‘ethnic threat’,” says Carmichael.

In Ontario, Quebec and B.C., on the other hand, where there is a large percentage of people who are from visible minorities, prison admission rates, over the same period were only between 10-15 people per 100 000 citizens for each year studied. And criminal charge rates were at or below 2,000 people for every 100,000 people (or 2 %) for each year in the decade.

Carmichael adds, “For members of visible minority groups, there appears to be a tipping point once they make up a sizable proportion of the population, where they are more able to push back against aggressive crime control measures that disproportionately target members of their community. It is likely that when such a threshold is reached, (and indications suggest that this happens when minorities reach about 10% or more of the population), politicians are less likely to engage in demonizing them by promoting harsh criminal justice policies.”

“It was alarming to me to find that not only was the size of the visible minority population a predictor of police department size, it was by far the strongest predictor,” says Carmichael. “The same pattern is to be found when it comes to incarceration.  The Canadian provinces with larger Aboriginals populations and with larger visible minority populations admit more individuals to federal prisons. These findings suggest that rather than viewing the criminal justice system as a tool to control crime it is better understood as a mechanism largely used to reduce the perceived threat of ethnic minorities. In my view, these findings together seriously challenge the conventional assumptions about widespread tolerance and celebration for Canada’s changing ethnic makeup.”

To read the full paper on incarceration in Canada: International Criminal Justice Review