Penguin feathers may be secret to effective anti-icing technology 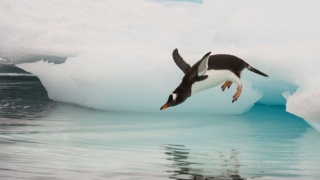 Ice buildup on powerlines and electric towers brought the northern US and southern Canada to a standstill during the Great Ice Storm of 1998, leaving many in the cold and dark for days and even weeks. Whether it is on wind turbines, electric towers, drones, or airplane wings, dealing with ice buildup typically depends on techniques that are time consuming, costly and/or use a lot of energy, along with various chemicals. But, by looking to nature, McGill researchers believe that they have found a promising new way of dealing with the problem. Their inspiration came from the wings of Gentoo penguins who swim in the ice-cold waters of the south polar region, with pelts that remain ice-free even when the outer surface temperature is well below freezing.

We initially explored the qualities of the lotus leaf, which is very good at shedding water but proved less effective at shedding ice,” said Anne Kietzig, who has been looking for a solution for close to a decade. She is an associate professor in Chemical Engineering at McGill and the director of the Biomimetic Surface Engineering Laboratory. “It was only when we started investigating the qualities of penguin feathers that we discovered a material found in nature that was able to shed both water and ice.”

The image on the left shows the microstructure of a penguin feather (the 10 micrometer closeup of the inset is the equivalent of 1/10th of the width of a human hair, to give a sense of scale) Those barbs, and barbules are branches off the feather’s central stem. The ‘hooks’ serve to attach individual feather hairs together into a mat. On the right is the stainless-steel wire cloth that the researchers decorated with nanogrooves that copy the hierarchy of the penguin feather structure (wire-like with nanogrooves on top).

“We found that the hierarchical arrangement of the feathers themselves provides water-shedding qualities, while their barbed surfaces lower the adhesion of ice,” explains Michael Wood, a recent PhD graduate who worked with Kietzig, who is one of the co-authors on a new paper in ACS Applied Material Interfaces. “We were able to replicate these combined effects through a laser-machined woven wire mesh.”

Kietzig adds, “It may seem counter intuitive, but the key to ice shedding is all the pores of the mesh which draw water in under freezing conditions. The water in these pores is the last to freeze, creating cracks when it expands, much like you see in the ice cube trays in your freezer. We need such little force to remove ice from our meshes because the crack in each of these pores easily snakes along the surface of those woven wires.”

The researchers carried out wind-tunnel testing of surfaces covered by the steel mesh and found that the treatment was 95% more effective at resisting ice build up than an unenveloped sheet of polished stainless steel. Because there are no chemical treatments involved, the new approach provides a potentially maintenance-free solution to ice buildup on wind turbines, electric towers and power lines as well as drones.

“Given the number of regulations in place in passenger aviation and the risks involved, it is unlikely that airplane wings will ever be simply wrapped in metal mesh,” adds Kietzig. “It is, possible, however, that the surface of plane wings may one day incorporate the kind of texture that we are exploring, and that de-icing will occur thanks to a combination of traditional de-icing techniques working in concert in wing surfaces that incorporate surface texture inspired by penguin wings.”

Although more research is needed, the results thus far are promising.