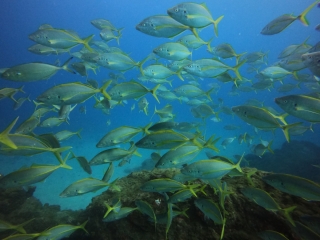 Warming ocean waters could reduce the ability of fish, especially large ones, to extract the oxygen they need from their environment. Animals require oxygen to generate energy for movement, growth and reproduction. In a recent paper in the Proceedings of the National Academy of Science, an international team of researchers from McGill, Montana and Radboud universities describe their newly developed model to determine how water temperature, oxygen availability, body size and activity affect metabolic demand for oxygen in fish.

“Our data suggest that, as temperature increases, the demand for oxygen of many fish species will exceed their capacity to extract oxygen from the environment through their gills,” explains Juan Rubalcaba, a Marie Skłodowska-Curie Postdoctoral Fellow at McGill, and lead author on the paper. “As a result, the aerobic capacity of fish decreases in warming waters, and this reduction may be more important in larger fishes. This tells us that global warming could limit the aerobic capacity of fish, impairing their physiological performance in the future.”

“Water temperature is already rising worldwide as a consequence of climate change and many fish species need to cope with this rapid temperature change, either by migrating toward colder regions or by adopting different life strategies such as shrinking in size over generations in order to avoid respiratory constraints,” said Art Woods, a professor of biological sciences at the University of Montana, and the senior author on the paper. “By including oxygen, this model stands apart by predicting observed patterns of variation in metabolic rate among fishes worldwide than current theories, which focus primarily on body size and temperature.”

To read: “Oxygen limitation may affect the temperature and size dependence of metabolism in aquatic ectotherms” by Juan G. Rubalcaba et al in the Proceedings of the National Academy of Science