No detectable limit to how long people can live 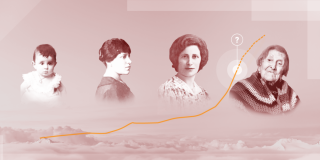 Emma Morano passed away last April. At 117 years old, the Italian woman was the oldest known living human being.

Super- centenarians, such as Morano and Jeanne Calment of France, who famously lived to be 122 years old, continue to fascinate scientists and have led them to wonder just how long humans can live. A study published in Nature last October concluded that the upper limit of human age is peaking at around 115 years.

Now, however, a new study in Nature by McGill University biologists Bryan G. Hughes and Siegfried Hekimi comes to a starkly different conclusion. By analyzing the lifespan of the longest-living individuals from the USA, the UK, France and Japan for each year since 1968, Hekimi and Hughes found no evidence for such a limit, and if such a maximum exists, it has yet to be reached or identified, Hekimi says.

Many people are aware of what has happened with average lifespans. In 1920, for example, the average newborn Canadian could expect to live 60 years; a Canadian born in 1980 could expect 76 years, and today, life expectancy has jumped to 82 years. Maximum lifespan seems to follow the same trend.

It’s impossible to predict what future lifespans in humans might look like, Hekimi says. Some scientists argue that technology, medical interventions, and improvements in living conditions could all push back the upper limit.

The funding for this study was provided by McGill University and the Canadian Institutes of Health Research.
Many possible maximum lifespan trajectories, by Bryan G. Hughes and Siegfried Hekimi, Nature