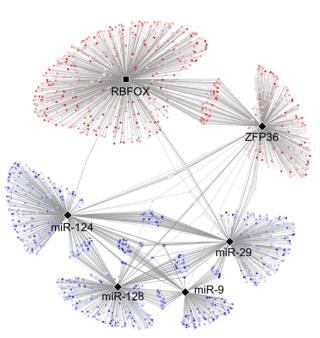 McGill University researchers have discovered a cellular mechanism that may contribute to the breakdown of communication between neurons in Alzheimer’s disease.

Their study, published in Nature Communications, homes in on the role of RNA molecules involved in synaptic transmission –- the process through which neurons communicate with each other. In the brain tissue of Alzheimer’s patients, the RNAs that encode synaptic proteins are degraded more rapidly than in healthy brain cells, the researchers found. They also discovered that a protein that helps stabilize these RNAs was less abundant in the neurons of Alzheimer’s patients.

Taken together, these findings indicate that inadequate levels of the protein, known as RBFOX1, may be a factor in the faulty connections that are a hallmark of Alzheimer’s disease, says Hamed S. Najafabadi, senior author of the paper and an assistant professor in McGill’s Department of Human Genetics.

A new piece of the puzzle

Although Alzheimer’s is by far the most common form of dementia, its underlying mechanisms aren’t fully understood, and there are currently no treatments to stop its progression. The McGill study reveals a new piece of the puzzle, which could provide leads for new therapeutic approaches.

Human cells produce thousands of different types of RNAs to carry genetic information. RNAs also decay constantly, and the balance between production and degradation determines how much of a given RNA is present in the cell. Yet scientists know relatively little about how RNA decay is controlled, largely because methods of measuring degradation have been expensive and not applicable to human tissues.

Previous research by Najafabadi had shown that RNA degradation is involved in different human diseases. Most of those findings came from studies in cell line models of diseases, however. “We wanted to directly measure the RNA degradation rate in human tissues, but available methods weren’t able to do that,” Najafabadi explains. So his team hit on a way to get around that problem. “We realized that by modeling the process of RNA production and decay, we could devise a mathematical method to calculate RNA degradation using existing genomics technologies.”

To test their new approach, the McGill researchers enlisted the help of scientists at the University of California, San Francisco. The California team, led by Hani Goodarzi, grew cells in a lab, and measured the rate of RNA degradation using a conventional method. At the same time, the McGill researchers estimated the rate using their mathematical method. The two results matched up, validating the mathematical framework.

“There’s still a lot to learn about the role of RNA degradation in Alzheimer’s and other diseases,” Najafabadi says. “For example, why is there a reduction of RBFOX1 in Alzheimer’s? Is the reduced amount of this protein a risk factor, or a feature of the later stages of the disease? And can we restore at least part of the normal function of the neurons by controlling the activity of RBFOX1?”

Funding for this work was provided by the McGill University Faculty of Medicine and the National Cancer Institute (U.S.).