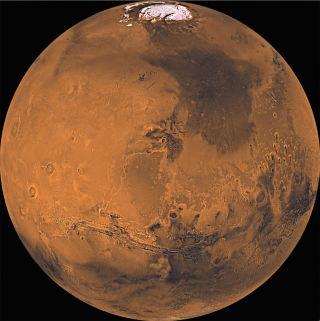 A new study by researchers at McGill University and UCL finds that this same three-part pattern applies to atmospheric conditions on Mars. The results, published in Geophysical Research Letters, also show that the sun plays a major role in determining macroweather.

The research promises to advance scientists’ understanding of the dynamics of Earth’s own atmosphere – and could provide insights into the weather of Venus, Saturn’s moon Titan, and possibly the gas giants Jupiter, Saturn, Uranus and Neptune.

The scientists chose to study Mars for its wealth of data with which to test their theory that a transitional “macroweather” regime exists on other planets. They used information collected from Viking – a Mars lander mission during the 1970s and 1980s -- and more recent data from a satellite orbiting Mars.

By taking into account how the sun heats Mars, as well as the thickness of the planet’s atmosphere, the scientists predicted that Martian temperature and wind would fluctuate similarly to Earth’s – but that the transition from weather to macroweather would take place over 1.8 Martian days (about two Earth days), compared with a week to 10 days on Earth.

“Our analysis of the data from Mars confirmed this prediction quite accurately,” said Shaun Lovejoy, a physics professor at McGill University in Montreal and lead author of the paper. “This adds to evidence, from studies of Earth’s atmosphere and oceans, that the sun plays a central role in shaping the transition from short-term weather fluctuations to macroweather.”

The findings also indicate that weather on Mars can be predicted with some skill up to only two days in advance, compared to Earth’s 10 days.

Co-author Professor Jan-Peter Muller from the UCL Mullard Space Science Laboratory, said: “We’re going to have a very hard time predicting the weather on Mars beyond two days given what we have found in weather records there, which could prove tricky for the European lander and rover!”

IMAGE: A global mosaic of Mars from the Viking mission. CREDIT: NASA/JPL

Founded in Montreal, Quebec, in 1821, McGill is a leading Canadian post-secondary institution. It has two campuses, 11 faculties, 11 professional schools, 300 programs of study and some 39,000 students, including more than 9,300 graduate students. McGill attracts students from over 150 countries around the world, its 8,200 international students making up 21 per cent of the student body.

Founded in 1826, UCL was the first English university established after Oxford and Cambridge, the first to admit students regardless of race, class, religion or gender, and the first to provide systematic teaching of law, architecture and medicine. We are among the world's top universities, as reflected by performance in a range of international rankings and tables. UCL currently has almost 29,000 students from 150 countries and in the region of 10,000 employees. Our annual income is more than £900 million.