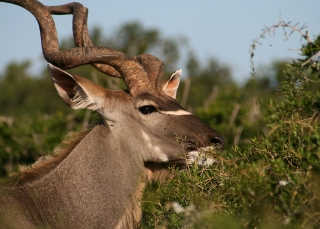 The eating habits of antelopes and their relatives are responsible, at least in part, for the creation of the savanna, according to a study by an international team of scientists published earlier this week. This finding provides an answer to one of the big questions in the Earth’s ecological history. It was a discovery the scientists made in an unusual way – by starting with what they observe today and then working backwards.

You may have seen pictures or films of gazelles delicately picking leaves off branches full of wicked-looking spikes that are several centimetres long. The scientist were able to uncover what happened in the past by mapping the distribution and evolution of the spiny plants on which gazelles and their relatives like to feed today.

A new technique to gain a picture of the past “It’s been difficult to get a picture of how savanna ecosystems evolved because the conditions needed to preserve animal and plant fossils are very different from one another,” says Jonathan Davies, a member of the research team and an expert in phylogenetic analysis who teaches biology at McGill University. “But by working with the African Centre for DNA Barcoding at the University of Johannesburg, we were able to sequence and compare DNA from nearly 2000 trees, and show that African plants only developed spines about 15 million years ago. That was about the same time that a new type of mammal, antelope and their relatives, spread across the continent following the collision between the continental plates of Africa and Eurasia.”

Prior to this collision, the African continent had been dominated by the large, now extinct, ancestors of browsing elephants and hyrax. “Elephants were so massive that they simply tromped over the trees so spines provided little defence against them,” said Tristan Charles-Dominique from the University of Cape Town, the lead author of the study. “But the antelopes who came after them were highly efficient browsers, often using their lips to take delicate bites from the leaves of these plants. So it is likely that plants developed spines to defend themselves against these new plant ‘predators’.”

The evolution of a spiny defence

What emerges from the research is a picture of a remarkable ‘arms race’ of evolution between plants and plant-eaters. The arrival of a new and efficient group of herbivores on the African continent that feasted upon young forest trees opened up the ancient forests to the spread of grass. Spiny plants evolved and developed longer and longer spines in response, in an attempt to protect themselves from these browsers.

One of the implications of the study, according to William Bond, who is also based at the University of Cape Town, is that the loss of large mammals like antelope as a result of human activity, may have profound impacts on the African landscape, with present day savannas reverting to thicket or forest.

To read “Spiny plants, mammal browsers and the origin of the African savannas” by Tristan Charles-Dominique et al in PNAS:www.pnas.org/cgi/doi/10.1073/pnas.1607493113

The research was financed by: the Mellon Foundation, the Claude Leon Foundation, the South African National Research Foundation, Genome Canada, the Ontario Genomics Institute, the International Development Research Centre, the University of Johannesburg Analytical Facility and the Royal Society.