Discovery sheds light on where visual memories are born 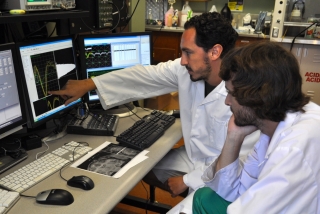 “When a tiger starts to move towards you, you need to know whether it is something you are actually seeing or whether it’s just something that you remember or have imagined,” says Prof. Julio Martinez-Trujillo of McGill’s Department of Physiology. The researcher and his team have discovered that there is a clear frontier in the brain between the area that encodes information about what is immediately before the eyes and the area that encodes the abstract representations that are the product of our short-term memory or imagination. It is an important advance in brain mapping and opens the doors to further research in the area of short-term memory.

These findings, which are described in an article just published in Nature Neuroscience, resolve a question that has occupied neuroscientists for years. Namely that of how and where exactly in the brain the visual information coming from our eyes is first transformed into short-term memories.  “We found that while one area in the brain processes information about what we are currently seeing, an area right beside it stores the information in short-term memory,” says McGill PhD student Diego Mendoza-Halliday, first author of the article.  “What is so exciting about this finding is that until now, no one knew the place where visual information first gets transformed into short-term memory.”

The researchers arrived at this conclusion by measuring the neuronal activity in these two areas in the brains of macaques as they first looked at, and then after a short time (1.2 - 2 seconds) remembered, a random sequence of dots moving across a computer screen like rainfall. What surprised Martinez-Trujillo and his team was how clearly demarcated the divide was between the activities and functions of the two brain areas, and this despite the fact that they lie side-by-side.

“It is rare to find this kind of sharp boundary in biological systems of any kind,” says Martinez-Trujillo. “Most of the time, when you look at the function of different brain areas, there is more of a transitional zone, more grey and not such a clear border between black and white. I think the evolutionary reason for this clear frontier is that it helped us to survive in dangerous situations.”

The discovery comes after five years spent by Martinez-Trujillo and his team doing research in the area. Despite this fact, he acknowledges that there was a certain amount of serendipity, and a lot of technological help involved in being able to capture a signal that travels for 3 milliseconds and fires synapses in neurons that lie right beside one another.

Martinez-Trujillo and his team continue to work on mapping the receptors and connectivity between these two areas of the brain. But what is most important for him is to try and relate this discovery to schizophrenia and other diseases that involve hallucinations, and in order to do so he is working with a psychiatrist at Montreal’s Douglas Hospital.

The research was funded by the Canadian Institutes of Health Research (CIHR) the Canada Research Chairs Program (CRC) and the EJLB Foundation.