School of Architecture to be named in perpetuity in honour of donor, McGill alumnus Peter Guo-hua Fu 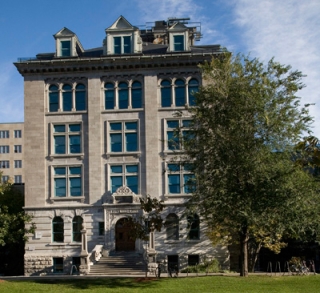 Shanghai’s spectacular skyline is studded with buildings shaped by architect Peter Guo-hua Fu. Now the McGill alumnus is setting his sights on a new project: taking McGill’s long history of world-class architecture education to the next level.

The University announced his landmark $12-million gift today at a special event attended by Mr. Fu, McGill leaders and special guests, including the Consul General of China in Montreal, Mr. Peng Jingtao.

“I am delighted to be able to contribute to the excellence of architecture education at McGill,” said Fu.

“Thank you to Peter Fu for this extraordinary gift,” said McGill’s Principal and Vice-Chancellor, Suzanne Fortier. “His vision and generosity will support the full range of architecture education at McGill, creating new learning and researching opportunities that will position the school and its students for a vibrant future.”

His gift, payable over six years, is allocated primarily to four key areas:

One portion of the gift will be used to create the Peter Guo-hua Fu Fellowships. These will be awarded, on the basis of academic merit, to graduate students entering or enrolled in the School. Preference will be given to citizens of China.

The Fellowships reflect Fu’s own experience. After earning his Master’s degree at Tongji University, he came to the McGill School of Architecture in 1990-91, aided by a Clifford C. F. Wong Fellowship, which is awarded to outstanding graduate students from China.

After completing his diploma in 1991, he moved to Toronto to join Zeidler Partnership Architects and then B+H Architects.

After working in Toronto for nine years, Fu returned to China and subsequently went on to establish his own firm, K.F. Stone Design International Inc. Canada. The company has designed an estimated five million square metres of Shanghai’s urban landscape, including hundreds of high-rise buildings such as the Da’An Garden and the Dongjing International Office Complex, Pudong. In addition to major residential and commercial projects, K.F. Stone is responsible for innovative projects such as a multi-stage outdoor theatre, built entirely from discarded shipping containers.

Although based in China, Fu retains strong ties with McGill, welcoming architecture students to intern at his company and serving as an adjunct professor at the School.

“Canada welcomed him as a student, and he in turn is committed to strengthening the links between the Canadian and Chinese academic communities,” said Principal Fortier, “and to transforming the McGill learning experience.”

“This gift comes at an opportune time in the history of our School and we are extremely fortunate to benefit from the support of Peter Fu,” said Martin Bressani, Director of McGill’s School of Architecture. “Thanks to his vision and commitment, McGill’s School of Architecture will continue to offer its students excellent teaching programs, as well as exciting internships and practical learning opportunities. His generosity will help us attract students to Montreal from across Canada, China and around the world, and offer them an unparalleled education.”

Fu remembers his education at McGill, and years in Canada, as “a truly transformative part of my life.” His gift to McGill, he says, is a way to give something back to the students of today—and tomorrow:

“In this, the 150th anniversary year of Canada, I am proud to express my deep appreciation and gratitude through this gift which will provide more students in Canada and China with the opportunity to acquire an exceptional education in architecture and engage in new learning opportunities.”