Homing in on source of mysterious cosmic radio bursts 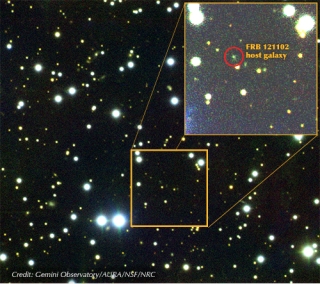 Astronomers have pinpointed for the first time the home galaxy of a Fast Radio Burst, moving scientists a step closer to detecting what causes these powerful but fleeting pulses of radio waves. FRBs, which last just a few thousandths of a second, have puzzled astrophysicists since their discovery a decade ago.

“Now we know that at least one of these FRBs originated within a dwarf galaxy located some three billion light-years beyond our Milky Way galaxy,” said McGill University postdoctoral researcher Shriharsh Tendulkar. He and other astronomers presented the findings today at the meeting of the American Astronomical Society in Grapevine, Texas. Results of the research are also published in the journal Nature and in companion papers in The Astrophysical Journal Letters.

Until now, astronomers hadn’t even been able to determine with certainty whether FRBs come from within our galaxy or beyond. While the exact cause of the high-energy bursts remains unclear, the fact that this particular FRB comes from a distant dwarf galaxy represents “a huge advance in our understanding of these events,” said Shami Chatterjee of Cornell University, another member of the international research team that produced the new results.

There are now 18 known FRBs. All were detected using single-dish radio telescopes that are unable to narrow down the object's location with enough precision to allow other observatories to identify its host environment. Unlike all the others, however, one FRB, discovered in November of 2012 at the Arecibo Observatory in Puerto Rico, has recurred numerous times – a pattern first detected in late 2015 by McGill PhD student Paul Scholz.

The repeating bursts from this object, named FRB 121102 after the date of the initial burst, allowed astronomers to watch for it this year using the National Science Foundation's (NSF) Karl G. Jansky Very Large Array (VLA), a multi-antenna radio telescope system with the resolving power, or ability to see fine detail, needed to precisely determine the object's location in the sky. In 83 hours of observing time over six months in 2016, the VLA detected nine bursts from FRB 121102.

Using the precise VLA position, Tendulkar and other researchers used the Gemini North telescope in Hawaii to make a visible-light image that identified a faint dwarf galaxy at the location of the bursts. Spectroscopic data from Gemini also enabled the researchers to determine that the dwarf galaxy is more than 3 billion light-years from Earth.

“The host galaxy for this FRB appears to be a very humble and unassuming dwarf galaxy, which is less than 1% of the mass or our Milky Way galaxy,” Tendulkar says. “That’s surprising. One would generally expect most FRBs to come from large galaxies which have the largest numbers of stars and neutron stars -- remnants of massive stars. This dwarf galaxy has fewer stars, but is forming stars at a high rate, which may suggest that FRBs are linked to young neutron stars. There are also two other classes of extreme events -- long duration gamma-ray bursts and superluminous supernovae -- that frequently occur in dwarf galaxies, as well. This discovery may hint at links between FRBs and those two kinds of events.”

In addition to detecting the bright bursts from FRB 121102, the VLA observations also revealed an ongoing, persistent source of weaker radio emission in the same region.

Next, a team of observers used the multiple radio telescopes of the European VLBI Network (EVN), along with the 1,000-foot-diameter William E. Gordon Telescope of the Arecibo Observatory, and the NSF's Very Long Baseline Array (VLBA) to determine the object's position with even greater accuracy.

"These ultra-high precision observations showed that the bursts and the persistent source must be within 100 light-years of each other," said Jason Hessels, of the Netherlands Institute for Radio Astronomy and the University of Amsterdam.

"We think that the bursts and the continuous source are likely to be either the same object or that they are somehow physically associated with each other," said Benito Marcote, of the Joint Institute for VLBI ERIC, Dwingeloo, Netherlands.

“There is still a lot of work to do to unravel the mystery surrounding FRBs,” says McGill physics professor Victoria Kaspi, a senior member of the international team that conducted the new studies. “But identifying the host galaxy for this repeating FRB marks a big step toward solving the puzzle.” The Canadian Hydrogen Intensity Mapping Experiment (CHIME), an interferometric radio telescope in British Columbia, could help answer remaining questions, Kaspi notes. CHIME will survey half the sky each day, potentially enabling it to detect dozens of FRBs per day, she says. “Once we understand the origin of this phenomenon, it could provide us with a new and valuable probe of the Universe.”