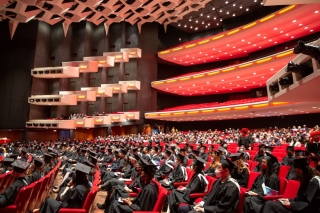 On October 26, 2022, 1,800 graduating students will cross the stage at McGill University’s Fall 2022 convocation ceremonies. They will celebrate with family and friends at Place des Arts, 175 St. Catherine Street West.

As part of the ceremonies, McGill will continue its tradition of conferring honorary degrees to highly talented and engaged individuals who serve as an inspiration for its community of students, professors, researchers, and staff.

At the Fall 2022 ceremonies, the university will confer its highest honours upon two accomplished McGill alumni:

In 1989, while the Internet was still in its infancy—and Alan Emtage was still a student at McGill—he created Archie, the world’s first search engine. Emtage went on to become a founding member of the Internet Society, which formulated many of today’s standards for Web technology, and co-chaired the working group that created the standard for URLs. Emtage has also proven himself a visionary when it comes to realizing the Internet’s potential to advance social good. In the 1990s, his Web development company, Mediapolis, created the DataLounge, one of the first Internet spaces dedicated to LGBT people and their experiences, and still an active and vibrant online community.

After completing his studies at McGill, Dr. Poy embarked on a long career specializing in treating and researching severe burns at Scarborough General Hospital’s pioneering Burn Unit, long the only unit of its kind in Canada. He has served the medical and wider community with leadership roles in numerous organizations, and has remained engaged with McGill by serving on the Dean’s Medical Advisory Board of the Faculty of Medicine, and leading philanthropic efforts for the Faculty of Medicine and Faculty of Arts. After retiring from his surgical practice in 1995, Poy embarked on a new career as a photographer, and has since held many exhibitions of his photographs.

“This year’s honorary doctorate recipients exemplify excellence and serve as a source of inspiration to our community,” says Professor Christopher Manfredi, Interim Principal and Vice-Chancellor of McGill. “Their work has left an indelible mark, transforming our understanding of ourselves and our world. Their generous leadership raises the bar for us all.”

“We take immense pride in the strength and determination of our graduates and are so pleased to share in the joy of this significant day in their lives. They are our future healers, innovators, and entrepreneurs who have gained the knowledge and skills that will prepare them to solve the global challenges of our time.”