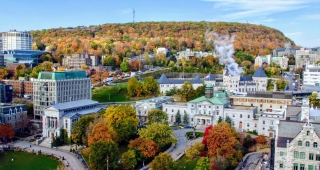 A landmark donation to support McGill University’s renowned genomics research and education programs from UK-based alumnus and long-time donor Victor Dahdaleh is a catalyst for advancements in genomics research. Thanks to gifts from Victor Dahdaleh totalling more than $30 million, McGill will launch the Victor Phillip Dahdaleh Institute of Genomic Medicine. Today’s announcement, which coincides with McGill’s annual Homecoming festivities, caps off more than a year of Bicentennial celebrations and transformative expressions of philanthropic support in honour of McGill’s 200th anniversary.

McGill has long been a leader in Canada and North America in the increasingly vital fields of RNA and genomics research. Victor Dahdaleh’s investment will further cement the University’s international leadership in genomics, while enabling the Institute to expand its high-impact research programs, invest in top talent, and train the next generation of world scientific leaders.

“On behalf of the McGill community, I would like to express my deep gratitude to Victor and Mona Dahdaleh for this visionary gift from a couple who have been great friends and loyal supporters of McGill for many years,” said Professor Christopher Manfredi, Interim Principal and Vice-Chancellor of McGill University. “Victor Dahdaleh’s support will be a catalyst for advancements in genomics research that will improve health outcomes for communities around the world. Victor Dahdaleh’s commitment to forging a healthier future through research is truly inspiring.”

The Institute will harness the interdisciplinary expertise and research infrastructure across McGill’s faculties to implement a full spectrum approach to genomic medicine, which draws on information from all of a person’s genes and how they interact to inform an individual’s clinical care. McGill researchers will lead breakthrough research aimed at the development of cutting-edge diagnostic tools, targeted treatments, and new pharmaceuticals and preventative vaccines. Additionally, the Institute’s integral social sciences pillar will draw on expertise across the University to lead important research on the ethical, policy, and legal implications of genomic medicine.

“It is an honour to contribute to McGill University’s world-leading genomics program,” said Victor Dahdaleh. “I feel strongly that genomic medicine is the key to preventing, treating and one day curing many of the diseases that impact lives, families and communities around the world. I’m proud to be a part of this important effort to improve worldwide health.”

In concert with the Faculty of Medicine and Health Sciences and affiliated hospitals within the McGill University Health Centre, the Institute will maximize opportunities for clinical interventions in high-priority fields where McGill is already an established leader – such as cancer, neuroscience and mental health, chronic inflammatory diseases, and infectious diseases, including COVID-19.

“Victor Dahdaleh’s generous gift provides crucial resources to help us attract impactful young scientists, students and trainees from around the world and create the conditions for these scientists to pursue their research activities and have a global impact on public health,” said Mark Lathrop, Director of the Institute. The gift will also provide important support for leveraging additional grant funding for the Institute.

The Institute’s training program will have a particular focus on training students from lower- and middle- income countries, a goal that is especially important for Victor Dahdaleh, who has directed many of his philanthropic efforts toward providing scholarships and training opportunities for disadvantaged students at world-class universities, including the London School of Economics.

Likewise, Victor Dahdaleh’s investment in genomic medicine at McGill is an extension of his exceptional legacy of supporting innovative global health and health science research in Canada and internationally. He has previously given more than $20 million to establish the Dahdaleh Institute for Global Health Research at his alma mater York University in Toronto. He is also a longstanding supporter of the National Heart and Lung Institute at Imperial College London, the British Heart Foundation, and Asthma + Lung UK, where he has contributed to leading-edge research into cardiovascular disease and cancer, including mesothelioma.

“Victor Dahdaleh shares McGill’s commitment to propelling innovation in genomic medicine on a global scale to improve diagnosis, treatment and preventative healthcare,” said Philippe Gros, Deputy Vice-Principal, Research and Innovation; Professor, Department of Biochemistry; and founder and co-lead of the McGill Research Centre on Complex Traits. “With his support, the Institute’s researchers will build new partnerships and deepen existing ties with leading genomics programs internationally, particularly in the UK, where McGill already works closely with researchers at the University of Oxford and Imperial College London, and Japan, where we share a joint PhD program with the University of Kyoto.”

Victor Dahdaleh is a leading Canadian entrepreneur and philanthropist, whose worldwide charitable work has supported education, health-related research, and social and economic development. Through the Victor Dahdaleh Foundation, he supports several scholarship programs for disadvantaged overseas students to study at top universities, opening the door to higher education in parts of the world where opportunities are limited. In addition, he has supported some of the world’s top centres of medical research, including several university health faculties, providing much needed funding to areas such as cardiovascular health, neuroscience, and global health and policy issues.

McGill’s largest donor from the UK, Dr. Dahdaleh has long been an active volunteer and supporter of the University. For nearly 30 years, he has served as a trustee of the UK-based McGill University Trust, which supports programs and initiatives across McGill, notably the McGill University Trust Scholarships for UK students wishing to study at the University. In 2007, he joined with the William J. Clinton Foundation and went on to establish the Victor Dahdaleh-Clinton Foundation Scholarship Program, which now provides 32 scholarships for outstanding undergraduates from low-income countries, in perpetuity. In 2016, he founded the Victor Dahdaleh Chair in Neuroscience to support an integrated approach to the study of chronic brain disease, incorporating neurology, psychiatry, and rehabilitation science, among other disciplines. More details about the Victor Dahdaleh Foundation’s philanthropic work are available here.

Dr. Dahdaleh is the owner and chairman of Dadco [est. 1915], a privately owned investment, manufacturing, and trading group. He is also an Honorary Fellow and governor of the London School of Economics, Fellow of the Duke of Edinburgh’s International Award, board member of the International Aluminium Institute, and a past president of the Canada-UK Chamber of Commerce.