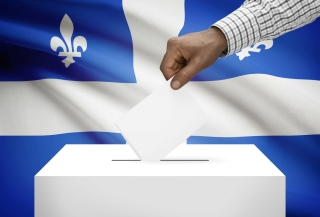 François Legault has been elected for a second mandate as Quebec premier with a majority government. Addressing supporters at his campaign headquarters, Legault told a large crowd that some of his key priorities will be the economy and tackling inflation. (CTV News).

“What will Quebec nationalism look like in the hands of a CAQ government that commands an even more resounding majority? Minority groups and protest parties are saying that the only option left is taking it to the streets, and while separatism was barely visible during the campaign, the CAQ’s positions on immigration, language and identity remain highly divisive. We can expect more activity before the courts as Laws 21 and 96, among others, become more prominent targets in the absence of legislative change.”

Pearl Eliadis is an Associate Professor at the Max Bell School of Public Policy, as well as an Adjunct Professor in the Faculty of Law. A senior lawyer in private practice and with more than two decades of public policy experience in federal and provincial governments, she has led successfully complex, global projects dealing with national institutions, evaluation, and human rights, with in-country missions to China, Ethiopia, Nepal, Rwanda, Sri Lanka, Sudan, Tajikistan and Timor Leste.

Mathieu Lavigne, PhD Candidate, Department of Political Science and McGill Institute for the Study of Canada

“Quebecers are concerned about misinformation and its impacts but have high levels of trust in the democratic process.”

Mathieu Lavigne is a PhD Candidate in the Department of Political Science and the McGill Institute for the Study of Canada. His research focuses on campaign and media effects, public opinion, political psychology, and political behavior. He leads the Quebec Election Misinformation Project, which identifies and responds to misinformation circulating during the 2022 provincial election and assess its effects on Quebecers' attitudes and behaviours.

“The CAQ’s impressive electoral victory raises several political questions. The first concerns electoral reform, as three of the four main parties were clearly disadvantaged by the first-past-the-post system. François Legault, who supported electoral reform before becoming premier, now says he no longer backs it, but the issue is likely to remain on the agenda. Second, while the CAQ is very strong outside of Montreal, it has only won two seats out of 27 on the island of Montreal. This gap is likely to remain a source of political tensions during his second term in office. Third, the CAQ has struggled with the issue of immigration and the management of diversity. It remains to be seen whether the CAQ government will seek to improve its relationship with ethno-racial and language minorities over the next four years.”

"The political repositioning carried out in 2015 by the CAQ, during which François Legault and his party asserted a nationalist but federalist posture more explicitly than before, is undoubtedly one of the defining political events of recent years in Quebec."