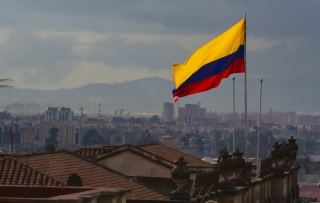 Colombia’s election will go to a runoff between two opposing anti-establishment candidates on 19 June after voters on Sunday were unable to pick a president outright. Gustavo Petro, a leftist former guerrilla and onetime mayor of Bogotá, won the largest share of the vote, with 40%, but fell short of the 50% required to win outright and prevent a second round. Petro’s rival in the runoff will be Rodolfo Hernández, a business magnate and social media firebrand, who is viewed as a conservative, populist outsider. (The Guardian)

"Although Colombians wanted change from an unpopular government associated with traditional political groups, in fact, the candidate most aligned with change did not make it to the run-off. However, Gustavo Petro, the candidate that took the biggest percentage of votes, is also likely to arouse resistance in a significant part of the electorate who see his past as a former member of a left-leaning guerrilla group and former mayor of Bogota as a big risk for the country. These two factors – rejection of the government and traditional politics and resistance to a left-leaning candidate – boosted the campaign of the populist outsider, Rodolfo Hernández, who has focused on an anti-political discourse which resonates with the desire for change. This position will be harder to sustain as the campaign progresses during the next three weeks because those traditional political groups he seems to reject are now supporting him."

Alejandro Angel Tapis is an Adjunct Professor in the Department of Political Science, where he teaches politics in Latin America. His scholarly work analyzes the economic impacts of political decisions both at the international arena and in the domestic arenas in several Latin American countries.