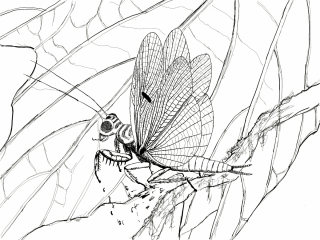 Artist’s interpretation of Labradormantis guilbaulti in liftoff among the leaves of a sycamore tree, Labrador, around 100 million years ago. The interpretation is based on fossils (for the wings) and living and extinct relatives (for the rest of the body). Fossilized sycamore leaves have been found in the same deposits as the mantis wings and show that this new insect species would have lived in a lush warm temperate forest during the Cretaceous. CREDIT: A. Demers-Potvin

A McGill-led research team has identified a new species of praying mantis thanks to imprints of its fossilized wings. It lived in Labrador, in the Canadian Subarctic around 100 million years ago, during the time of the dinosaurs, in the Late Cretaceous period. The researchers believe that the fossils of the new genus and species, Labradormantis guilbaulti, helps to establish evolutionary relationships between previously known species and advances the scientific understanding of the evolution of the most ‘primitive’ modern praying mantises. The unusual find, described in a recently published study in Systematic Entomology, also sheds light on wing evolution among mantises and their relatives more generally.

Digging through mountains of rubble

The research team, which included members from the Muséum national d’Histoire naturelle in Paris, and the Musée de paléontologie et de l’évolution in Montreal, found the specimens during fieldwork at an abandoned iron mine located in Labrador, near Schefferville (Quebec).

“Our days were spent essentially scouring the surface of piles of rubble that had been excavated from the mine,” said Alexandre Demers-Potvin, a PhD student at McGill, a National Geographic Emerging Explorer, and the lead author on the paper. “Every now and then, one of the burgundy rocks on the ground would contain either a fossil leaf or a fossil insect, which we would then promptly collect. When the two fossils of Labradormantis guilbaulti were found in the field, none of us could identify them at first. It was only when I showed photos to paleoentomologist Olivier Béthoux, the senior author of this paper, that we started to think that we had the hind-wings of a previously unknown primitive mantis species.”

The real surprise came when they were able to look more closely at a number of insect fossils in Dr. Béthoux’s lab in Paris. Closer observations of certain specimens revealed they had not only the hind-wings but also the fore-wings of a hitherto unidentified species.

It was already known that most modern praying mantises, with their characteristic grasping forelegs, look very different from their oldest fossil ancestors. However, it has been difficult for paleontologists to trace mantis evolution more precisely because of the multiple gaps in the fossil record of these insects, combined with the very different anatomies of the three most primitive modern mantis groups (Chaeteessidae, Mantoididae and Metallyticidae).

By using Reflectance Transformation Imaging (RTI), an emerging photographing method in paleontology, the researchers were able to get a better view of the intricate network of veins lying along the fossil wings. They noticed a vein lying along the hind-wing’s folding line (called AA2*) that is only found in one modern mantis lineage, the Chaeteessidae family. Following this key observation, they produced a revised evolutionary tree that included Labradormantis among some of its living and extinct relatives.

The identification of this single vein in this newly discovered species suggested that this structure had not evolved among Chaeteessidae in isolation, but that it was present in extinct relatives of our modern mantises as well. The Chaeteessidae lineage is simply the only modern mantis group to retain it.

“It’s very rare to advance our understanding of insect evolution without seeing a complete insect specimen trapped in amber,” said Hans Larsson, from McGill’s Redpath Museum, and one of the authors on the paper. “In our paper, we present a very rare case in which a less well-preserved fossil has a similarly high impact. We hope that this study inspires investigations of other wing impression fossils to address similar questions elsewhere in the insect evolutionary tree.”

The two specimens described in this study are now part of the collections of the Musée de paléontologie et de l’évolution, Montréal, curated by M. Cournoyer.

For more information about the larger research project on the fauna and flora of Cretaceous Quebec and Labrador – see video (in French), as well as the report written for the Musée de paléontologie et de l’évolution, published in the latest edition of Le Bulletin du MPE (in French)