COVID-19: Coughing without masks, distancing alone is not enough 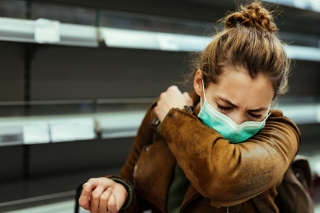 To prevent the spread of COVID-19 indoors, the two metres physical distancing guideline is not enough without masks, according to researchers from Quebec, Illinois, and Texas. However, wearing a mask indoors can reduce the contamination range of airborne particles by about 67 percent.

“Mask mandates and good ventilation are critically important to curb the spread of more contagious strains of COVID-19, especially during the flu season and winter months as more people socialize indoors,” says Saad Akhtar, a former doctoral student under the supervision of Professor Agus Sasmito at McGill University.

While most public health guidelines recommend physical distancing of two metres for people from different households, the researchers say distancing alone is not enough to prevent the spread of COVID-19. In a study published in Building and Environment, the researchers found that when people are unmasked, more than 70 percent of airborne particles pass the two metres threshold within the 30 seconds. By contrast, less than 1 percent of particles cross the two-metre mark if masks are worn.

Evolution of a cough

Evolution of a cough with mask

While ventilation, a person’s posture, and mask-wearing impacted the spread of the bio-contaminants significantly, the impact of age and gender was marginal, the researchers found.

Coughing is one of the main sources of spread of airborne viruses from symptomatic individuals. “This study advances the understanding of how infectious particles can spread from a source to its surroundings and can help policymakers and governments make informed decisions about guidelines for masks and distancing in indoor settings,” says Akhtar.