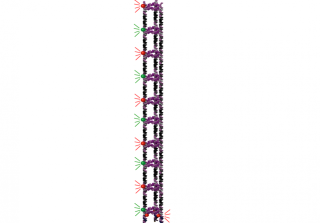 Many researchers, including the McGill team, have previously constructed nanotubes using a method that relies on spontaneous assembly of DNA in solution. The new technique, reported today in Nature Chemistry, promises to yield fewer structural flaws than the spontaneous-assembly method. The building-block approach also makes it possible to better control the size and patterns of the DNA structures, the scientists report.

“Just like a Tetris game, where we manipulate the game pieces with the aim of creating a horizontal line of several blocks, we can now build long nanotubes block by block,” said Amani Hariri, a PhD student in McGill’s Department of Chemistry and lead author of the study. “By using a fluorescence microscope we can further visualize the formation of the tubes at each stage of assembly, as each block is tagged with a fluorescent compound that serves as a beacon. We can then count the number of blocks incorporated in each tube as it is constructed.”

This new technique was made possible by the development in recent years of single-molecule microscopy, which enables scientists to peer into the nano-world by turning the fluorescence of individual molecules on and off. (That groundbreaking work won three U.S.- and German-based scientists the 2014 Nobel Prize in Chemistry.)

The custom-built assembly technique developed through this collaboration “gives us the ability to monitor the nanotubes as we’re building them, and see their structure, robustness and morphology,” Cosa said.

“We wanted to control the nanotubes’ lengths and features one-by-one,” said Sleiman, who holds the Canada Research Chair in DNA Nanoscience. The resulting “designer nanotubes,” she adds, promise to be far cheaper to produce on a large scale than those created with so-called DNA origami, another innovative technique for using DNA as a nanoscale construction material.

Funding for the research was provided by the Natural Sciences and Engineering Research Council of Canada, the Canada Foundation for Innovation, NanoQuébec, the Canadian Institutes of Health Research and the Fonds de recherché du Québec – Nature et technologies.

IMAGE: In the new method for building nanotubes, blocks tagged with a fluorescent dye are incorporated step by step, enabling researchers to monitor formation of the structures as they are constructed. CREDIT: Graham D. Hamblin