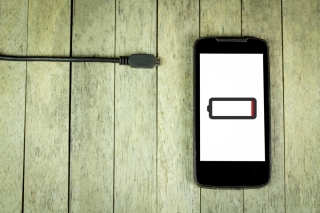 Who hasn’t lived through the frustrating experience of being without a phone after forgetting to recharge it? This could one day be a thing of the past thanks to technology being developed by Hydro-Québec and McGill University.

Lithium-ion batteries have allowed the rapid proliferation of all kinds of mobile devices such as phones, tablets and computers. These tools however require frequent re-charging because of the limited energy density of their batteries.

“With smart phones now, you can basically carry your whole office in that device, they are loaded with all sorts of applications so you need a lot of power to use it everyday and sometimes, you don’t have access to a plug to recharge,” explains Professor George P. Demopoulos, chair of Mining and Materials Engineering at McGill University.

This has led to the development of portable solar chargers but these hybrid devices are difficult to miniaturize due to their complex circuitry and packaging issues.

To solve this problem, scientists at McGill University and the Hydro-Québec’s research institute are working on a single device capable of harvesting and storing energy using light. In other words, a self-charging battery.

A novel concept presented in a Nature Communications paper by Professor Demopoulos and researchers at Hydro-Québec paves the way to these so-called light-charged batteries.

The study shows that a standard cathode from a lithium-ion battery can be “sensitized” to light by incorporating photo-harvesting dye molecules. “In other words,” says Dr. Andrea Paolella, the study’s lead author and researcher at Hydro-Québec, “our research team was able to simulate a charging process using light as a source of energy.”

Scientists will now have to build an anode, the storage component, which will close the device’s circuit, allowing energy produced by the cathode described in Nature Communications to be transferred and stored. If they succeed, they will have built the world’s first 100% self-charging lithium-ion battery.

The research team is already working on phase two of this project, thanks to a $564,000 grant from the Natural Sciences and Engineering Research Council of Canada.

“We have done half of the job,” says Professor Demopoulos, co-senior author of the paper with Hydro-Québec’s Dr. Karim Zaghib, a world leading expert on batteries. “We know that we can design the electrode that absorbs light. “This grant will give us the opportunity to bridge the gap and demonstrate that this new concept of a light-chargeable battery is possible.”

“I’m an optimist and I think we can get a fully working device,” says Paolella, who is also a former post-doctoral student from McGill. “Theoretically speaking, our goal is to develop a new hybrid solar-battery system, but depending on the power it can generate when we miniaturize it, we can imagine applications for portable devices such as phones”.

“Hydro-Québec has a strong global position with regard to the development of innovative, high-performance and safe battery materials,” says Karim Zaghib Director – Energy Storage and Conservation at IREQ, Hydro-Québec’s research institute.

While it may take a few years to complete the second phase of the project, Professor Demopoulos believes this “passive form of charging” could play an important role in portable devices of the future…

Funding for the research was provided by Hydro-Québec. The Natural Sciences and Engineering Research Council of Canada provides funding for the next phase of the project via Grant STPG# 493929.