Biodiverse agriculture as part of a food-secure future 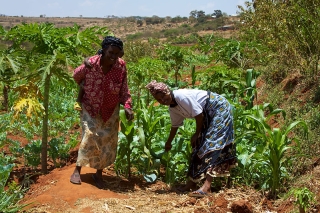 Given the need to feed an estimated 2.4 billion more people by the year 2050, the drive toward large-scale, single-crop farming around the world may seem inexorable.

But there’s an important downside to this trend, argues Timothy Johns, Professor of Human Nutrition at McGill University in Montreal, in a paper presented Feb. 15 at the annual meeting of the American Association for the Advancement of Science in Chicago.

Small farmers, by contrast, in many places continue to grow a range of species and multiple varieties that form the basis of their diet and nutrition. Use of a range of wild species of fruit, vegetables, condiments and medicines, as well as wild animal-sourced foods, increase the likelihood that subsistence farmers with access to natural ecosystems meet their nutrition and health needs.

The problem is that smallholder farmers in developing countries often have low productivity and little likelihood of generating the profits needed to rise above poverty level, says Prof. Johns, who directs the McGill Canadian Field Studies in Africa program. In particular, the smallholder farms in sub-Saharan Africa, which account for more than 90% of agricultural production and the primary livelihood of 65% of the population, need to be more productive.

When they have access to improved technology, however, smallholder farmers can be both more productive and more sustainable than large-scale, intensive agriculture. Using family members in farming reduces labor and supervision costs, while a more intimate knowledge of the local soil, plants and animals enables smallholders to maximize output.  In Brazil, for example, national data from the Censo Agropecuário shows that “family farms” produce 38% of national agricultural value from 24% of the agricultural land. An assessment of 286 projects in 57 countries, moreover, shows that low-cost, sustainable and diversity-enhancing technologies increased average crop yields on small farms by 79% since the early 1990s.

Carbohydrates – mainly cereals, sugars, potatoes and other tubers – and vegetable oils produced efficiently by large-scale agriculture and distributed through global trade are more affordable for many people than lower-calorie, more nutritious foods. In many cases, the result is a form of malnutrition defined by overconsumption of calories. This has helped fuel a growing global epidemic of obesity and chronic diseases such as diabetes and cardiovascular disease.

Meanwhile, some 2 billion people suffer from deficiencies in micronutrients, most importantly iron, vitamin A, iodine and zinc. This typically results from not eating enough foods rich in essential vitamins and minerals, such as animal-source foods, fruits, vegetables and legumes.

Socially guided food-policy decisions should value the environmental, health, social and cultural benefits offered by agrobiodiversity, Prof. Johns argues. One example of this approach: Brazil’s National School Feeding Law and program since 2009 requires that at least 30% of food in the program must come from family agriculture. It also has explicit guidelines for the use of healthy food in school menus, including foods that respect the culture and traditions; and it provides incentives for the purchase of diversified foods, preferably from local family agriculture.

“Food-policy makers around the world should seek to develop novel compensation mechanisms that reflect the benefits of small-scale, biodiverse agriculture,” Prof. Johns says. “This may involve direct subsidies to farmers, but it must also involve investment in extension services, infrastructure, supply-chain research and development, and progressive market regulation.”