Limits to growth appear to be universal across all living things 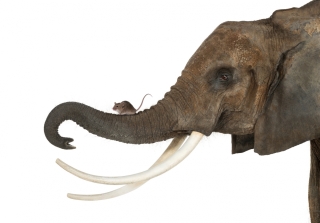 The diversity of life is staggering. From microscopic algae to elephants, life has devised countless ways to thrive in every environment on the planet. But while biologists have tended to focus on the many varied forms that species have evolved, the age of ‘big data’ offers an unprecedented view of some surprisingly common features shared by all creatures, great and small.

A new paper, published this week in PNAS, shows how, from the tiniest bacteria to the largest blue whale, metabolism, abundance, growth and mortality all follow strikingly consistent relationships with body size. The work, which was begun by lead author Ian Hatton while he was a PhD student at McGill University, brings together data from many thousands of studies to show that underlying the endless variety of living things many of the most important features of life follow universal laws.

“The fact that we find these simple mathematical relationships that span all life, points to some fundamental process at the heart of living systems that we don’t yet fully understand,” explains Hatton, now a researcher at ICTA-UAB at the Autonomous University of Barcelona.

Turns existing theory on its head

The study also presents evidence that suggests one of ecology’s most prominent theories, called the Metabolic Theory of Ecology, needs to be re-examined. This theory has played a major role in ecological thinking, based on the idea that an organism’s metabolic rate is the principal limit on many other vital traits, including how quickly it can grow.

“One of our key findings is that limits to the rate at which an organism can grow seems to put the brakes on metabolism, rather than the other way around,” says co-author Eric Galbraith, a professor in Earth and Planetary Science at McGill, and also affiliated with ICTA-UAB. “This puts growth in the driver’s seat for understanding these large-scale patterns.”

Given that growth underlies everything from juvenile development to cancer, and from resource productivity to global carbon cycling, understanding growth more generally could prove very important.

“What is so astounding is that no matter where you look, no matter what kind of living system, everything seems to follow the same growth function”, says Hatton. “We can’t yet explain it, but we know it has deep implications”.

The paper, which also includes coauthors from Princeton University, Charles University of the Czech Republic and the CNRS in France, offers a new perspective on life’s most fundamental features, and the extraordinary unity pervading life’s diversity.

“Linking scaling laws across eukaryotes” published in Proceedings of the National Academy of Sciences, USAby