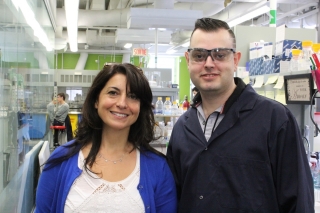 While it may still sound like science fiction to most of us, researchers have been piecing together and experimenting with DNA structures for decades. And, in recent years, work by scientists such as McGill University chemistry professor Hanadi Sleiman has moved the use of man-made DNA structures closer to a variety of real-world applications.

But as these applications continue to develop, they require increasingly large and complex strands of DNA. That has posed a problem, because the automated systems used for making synthetic DNA can’t produce strands containing more than about 100 bases (the chemicals that link up to form the strands). It can take hundreds of these short strands to assemble nanotubes for applications such as smart drug-delivery systems. In new research published May 5 in Nature Communications, however, Sleiman’’s team at McGill reports that it has devised a technique to create much longer strands of DNA, including custom-designed sequence patterns. What’s more, this approach also produces large amounts of these longer strands in just a few hours, making the process potentially more economical and commercially viable than existing techniques.

The new method involves piecing together small strands one after the other, so that they attach into a longer DNA strand with the help of an enzyme known as ligase.  A second enzyme, polymerase, is then used to generate many copies of the long DNA strand, yielding larger volumes of the material. The polymerase process has the added advantage of correcting any errors that may have been introduced into the sequence, amplifying only the correctly sequenced, full-length product.

The team used these strands as a scaffold to make DNA nanotubes, demonstrating that the technique allows the length and functions of the tubes to be precisely programmed. “In the end, what we get is a long, synthetic DNA strand with exactly the sequence of bases that we want, and with exactly as many repeat units as we want,” explains Sleiman, who co-authored the study with Graham Hamblin, who recently completed his doctorate, and PhD student Janane Rahbani.

“This work opens the door toward a new design strategy in DNA nanotechnology,” Sleiman says. “This could provide access to designer DNA materials that are economical and can compete with cheaper, but less versatile technologies. In the future, uses could range from customized gene and protein synthesis, to applications in nanoelectronics, nano-optics, and medicine, including diagnosis and therapy.”

Partners in research: Funding for the research was provided by the Natural Sciences and Engineering Research Council of Canada, the Fonds de recherché du Québec – Nature et technologies, the Canada Foundation for Innovation, the Canadian Institutes of Health Research, and the Centre for Self-Assembled Chemical Structures.