Viruses that infect bacteria could be used to fight pathogens, promote health 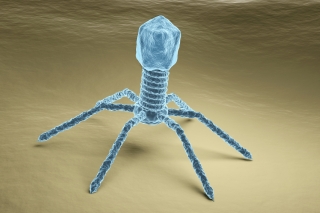 New research spearheaded by McGill University has discovered that bacteriophages (viruses that infect bacteria) found in the intestinal tracts of children may play a role in childhood stunting, a significant impediment to growth that affects 22% of children under the age of five around the world.

The study, published today in Cell Host & Microbe, also suggests that because they affect the abundance and diversity of bacterial communities in the gastrointestinal tract, these viruses could also be used to improve health. The researchers believe this work offers hope of developing new cost efficient therapies for populations where nutritional interventions, which have been shown to work, are difficult to implement and sustain in vulnerable human populations.

Earlier studies had suggested that the gut microbiome might play a role in stunting by showing that stunted children have increased numbers of disease-causing bacteria—associated with impaired digestive and absorption functions—living in their gastrointestinal tracts.

But while much research has focused on the bacteria present in our gut and the influence they can have on human health, little attention has thus far been paid to other very common residents of our gastrointestinal tract – bacteriophages.

“Phages or bacteriophages, which are bacterial viruses, are naturally found in every environment where bacteria are found, and the human gut is no exception,” says Corinne Maurice, an assistant professor in McGill’s Department of Microbiology and Immunology and senior author of the new study. “Because phages are as abundant as their hosts, they might be involved in regulating them in many ways by killing specific bacteria, transferring virulence or antibiotic resistance genes to them, for example, but we currently don’t have a clear understanding of what they do and how they do it. This is a fairly new and exciting field of research.”

To understand how these viruses might play a role in stunting, Maurice’s team, in collaboration with the International Centre for Diarrheal Disease Research in Bangladesh, collected fecal samples from 30 non-stunted and 30 unrelated stunted Bangladeshi children aged between 14 and 38 months.

Using a combination of microscopy, ribosomal gene sequencing, and metagenomics, they were able to determine that the phages found in the gut of non-stunted and stunted children are distinct. Furthermore, when gut bacteria from non-stunted children were exposed to phages from the guts of stunted children in vitro, they found that “bad” bacteria, suspected of being involved in stunting, proliferated.

“By showing that phages can change the bacterial community in children between 14 and 23 months, our work shows the potential of phages for reestablishing the gut bacterial community in stunting,” says Mohammadali Khan Mirzaei, a former postdoctoral student in the Maurice lab and first author of the new study.

“Stunting has lifelong consequences (health/socioeconomic) and can be transferred from mother to child,” says Maurice, who is also Canada Research Chair in Gut Microbial Physiology and a CIFAR Azrieli Global Scholar. “If phages can change bacterial communities in a specific way and long-term during child development, this could be a cheap treatment with no risk of antibiotic resistance.”

Though the findings now need to be validated using a larger sample and in animal models, Maurice says that by understanding interactions between bacteria and viruses in the human gut, we might be able to one day manipulate them to improve human health.

This study was funded by the Bill and Melinda Gates Foundation and the Canada Research Chair Program.