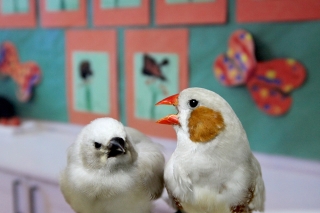 Adult songbirds modify their vocalizations when singing to juveniles in the same way that humans alter their speech when talking to babies. The resulting brain activity in young birds could shed light on speech learning and certain developmental disorders in humans, according to a study by McGill University researchers.

Lead author Jon Sakata, a professor of neurobiology at McGill, says that songbirds learn vocalizations like humans learn speech. “Songbirds first listen to and memorize the sound of adult songs and then undergo a period of vocal practice–in essence, babbling–to master the production of song.”

Researchers have been studying song learning in birds for some time. But the degree to which social interaction with adult birds contributes to that learning has been unclear. That’s because, unlike this current work, past studies didn’t control for the time exposed to song and the presence of other birds.

In this study, published in the journal Proceedings of the National Academy of Sciences, a group of juvenile zebra finches was allowed to interact with an adult. Another group simply heard adult songs played through a speaker. After a brief period of “tutoring” the juveniles were house individually for months as they practiced their tunes.

Sakata and his team found that avian pupils who socialized with an adult learned the adult’s song much better. That was true even if the social tutoring lasted just one day. In analyzing why this would be so, Sakata and his team made a surprising discovery.

Adult zebra finches change their vocalizations when singing to juveniles. Sakata says just as people speak more slowly and repeat words more often when speaking to infants, so do these birds. “We found that adult zebra finches similarly slow down their song by increasing the interval between song phrases and repeat individual song elements more often when singing to juveniles.”

What’s more, the researchers found that juvenile birds pay more attention to this “baby talk” compared to other songs. And the more the juveniles paid attention, the better they learned. The researchers took their work a step further by examining the activity of certain neurons in parts of the brain associated with attention. They found that more neurons that produce the chemicals dopamine and norepinephrine were turned on after socially interacting with a singing adult than after simply hearing song through a speaker.

Prof. Sakata says this finding could have implications beyond the avian world. “Our data suggest that dysfunctions in these neurons could contribute to social and communicative disorders in humans. For example, children who suffer from autism spectrum disorders have difficulty processing social information and learning language, and these neurons might be potential targets for treating such disorders.”

Sakata is now testing whether raising dopamine and norepinephrine levels in the brain can help birds learn song when they only hear adult songs.  As he puts it, “We are testing whether we can “trick” a bird’s brain into thinking that the bird is being socially tutored.”

Image: Norepinephrine-producing neurons (green) in the locus coeruleus of the songbird brain.  Some of these neurons express the protein EGR-1 (red), a cellular marker of neural activity. The researchers found that social interactions during song tutoring increase the percent of norepinephrine-producing neurons that express EGR-1, suggesting that this neuronal population is more active during social tutoring.  Credit: Yining Chen

This research was supported by the Natural Sciences and Engineering Research Council of Canada, the Fonds de recherche du Québec – Nature et technologies, a Tomlinson Graduate Fellowship, and the Center for Studies in Behavioral Neurobiology.