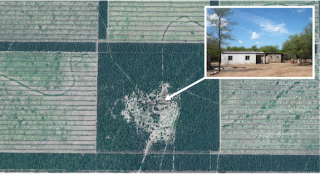 Satellite images reveal where forest-dependent people live inside the forests of the South American Gran Chaco, and how deforestation for cattle ranching leads to an erosion of their resource base. (Background photo: Google EarthTM / Inset photo: I. Gasparri).

Forest-dependent people living across the Gran Chaco have been put on the map for the first time. As agribusiness expands into the dry forest on which they rely, the impact of that expansion on them has been difficult to document because their homesteads are dotted over 1 million km2. But now an international team of researchers, including a researcher from McGill University, has used high resolution satellite imagery to systematically identify these homesteads across this vast area for the first time. By looking at images taken over a period of 30 years, the researchers found that where agribusiness advanced, the livelihoods of forest-dependent people were threatened, resulting in their displacement and the disappearance of thousands of homesteads. The researchers believe that mapping forest-dependent people is a much-needed step to better consider them in future sustainability planning.

There are few places on the globe where tropical forests are disappearing as rapidly as in the South American Gran Chaco. This semiarid lowland covers over a million km2 and stretches across parts of Paraguay, Bolivia, Argentina, and Brazil. While it’s known that agricultural expansion into tropical forests leads to major environmental destruction, the social impacts of deforestation often remain hidden. A main reason for this is a lack of data on where people live inside tropical forests.

A new study, published this week in the Proceedings of the National Academy of Sciences and involving an international team of researchers from Germany, Argentina, and the Netherlands, as well as from McGill University, puts these forest-dependent people on the map for the first time. By systematically using high-resolution satellite images, the team digitized individual homesteads of forest-dependent people across the Chaco and found that close to 20 per cent of these homesteads had disappeared over the period between 1985-2015.

The effects of expanding agribusiness

“We found that in 1985 there were about 28,000 homesteads spread across almost half of the Chaco forests,” says Dr. Christian Levers, Assistant Professor at VU Amsterdam and lead-author of the study. “By looking at images from the past 30 years we found that more than 5,000 homesteads have disappeared since then. And an even larger number of homesteads have lost the forests on which they depend due to encroaching agribusiness.”

Forest-dependent people use the forests surrounding their homesteads for firewood and timber, livestock grazing, subsistence hunting, or collecting honey. But homestead numbers have been dropping as advancing agribusiness reduces the size of the forests on which they depend, and large-scale farmers erect fences that limit people’s access to the forests that remain standing.

“Mapping where forest-dependent people live and how deforestation affects them is a first and much-needed step towards more adequately representing them in land-use planning and policy discussions,” says Yann le Polain de Waroux, one of the study’s co-authors and an Assistant Professor of Geography at McGill University.

Deforestation in the Gran Chaco is related mainly to beef and soybean production for international markets, including those in Europe and North America. The study found that the homesteads that disappeared were mainly located where agribusiness has expanded most dramatically.

“This research clearly shows how our consumption impacts forest-dependent people around the world, people who are vulnerable and poor,” says Dr. Alfredo Romero-Muñoz, a researcher at Humboldt University Berlin and co-author of the study. “Agriculture is expanding into many tropical dry forests around the world, and we urgently need to consider not only the impacts on biodiversity and the global climate, but also the huge impacts it has on forest-dependent people.”

A key finding of the study is that deforestation leads to the increasing ecological marginalization of forest-dependent people. “What we mean here is that local people experience a massive erosion of the basis of their livelihoods as the forest is converted,” explains Prof. Tobias Kuemmerle from Humboldt-University Berlin and a senior author on the study. “We also found that those homesteads that persist or have emerged are often in places that are not very suitable for agriculture, which is another form of marginalization.”

The researchers believe that mapping forest-dependent people is a much-needed first step towards better considering them in future sustainability planning.