Institute at Macdonald Campus to be renamed in honour of Margaret A. Gilliam 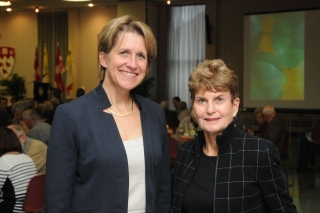 At a special announcement today on McGill University’s Macdonald Campus, researchers affiliated with the University’s Institute for Global Food Security revealed that our prospects now seem somewhat more encouraging, thanks to a landmark gift of $5 million from McGill alumna Margaret A. Gilliam, BSc’59.

The donation – the largest ever to McGill from a graduate residing in New York – will help the campus’s professors, researchers and growing contingent of graduate students in their ongoing efforts to understand the root causes of hunger and malnutrition, and develop novel solutions to eradicate food insecurity around the world.

The University also announced that, as a token of appreciation, it will be naming the Institute in Margaret Gilliam’s honour.

“I am grateful to Margaret Gilliam for the commitment and generosity she has shown to the Faculty of Agricultural and Environmental Sciences and its efforts to advance global food security,” said McGill’s Principal and Vice-Chancellor, Suzanne Fortier. “Ms. Gilliam’s investment will extend far beyond McGill and will ultimately have a powerful impact on the health and well-being of our entire global community.”

In addition to creating an endowment to support the Institute’s long-term growth and stability, Gilliam’s gift will fund a Graduate Student Fund that will provide bursaries, internships, and field studies support to students. It will also fund a Consultancy Hub in Global Food Security that will allow the Institute to expand its outreach by developing and attracting working partnerships with other world-class institutions, and becoming an important participant in policy-making.

Established in 2010 and based at McGill’s Faculty of Agricultural and Environmental Sciences, the Institute for Global Food Security is widely recognized as Canada’s leading centre for research, education, knowledge dissemination and specialized initiatives related to food, agriculture, nutrition and water in a global context.

The Institute’s scientists are taking concrete steps to ensure that the world’s populations have secure access to sufficient, safe and nutritious food supplies. They have developed precise methods to measure food insecurity, which have been adopted by the United Nations Food and Agriculture Organization (FAO). Through collaborative research projects around the globe, McGill researchers are tackling issues ranging from developing nutritious potato varieties in Colombia, to building capacity for sustainable livelihoods and health in Ghana.

“Access to food and water are fundamental human rights that are being challenged by population growth, depletion of non-renewable resources, armed conflict, pollution of ecosystems and the effects of climate change,” said Anja Geitmann, Dean and Associate Vice-Principal (Macdonald), Faculty of Agricultural and Environmental Sciences. “McGill and the Margaret A. Gilliam Institute for Global Food Security will rise to this challenge by engaging expertise from across disciplines and from all corners of the world.”

Born in Ottawa, Gilliam spent her formative years in various parts of Canada, including rural British Columbia, where her family operated a sheep farm. After studying Science at McGill, she earned a degree from the Harvard-Radcliffe Program in Business Administration and then embarked on a successful career in New York as a retail strategist and consultant.

Gilliam has been a longtime supporter of her alma mater and the Faculty of Agricultural and Environmental Sciences. “If we are to make any sort of impact on global food insecurity and raise millions of people out of the depths of hunger and malnutrition, it will require not just the attention and commitment of governments around the world, but also the technical and intellectual expertise of our top universities and our most advanced researchers,” she said. “I am pleased that McGill is working so hard to address this issue, and to introduce a new generation of students to the field, and I am excited that I can lend my support to this important global endeavour.”

This gift brings Gilliam’s lifetime support to the Institute to $6.5 million. Her last donation, in 2012, helped establish the Margaret A. Gilliam Faculty Scholar in Global Food Security – currently held by the Institute’s director, Dr. Hugo Melgar-Quiñonez – as well as a named graduate fellowship award and a lecture series aimed at broadening public understanding of the complex issues related to global hunger.

About the Faculty of Agricultural and Environmental Sciences

McGill’s Faculty of Agricultural and Environmental Sciences, located at the University’s Macdonald campus, offers academic programs ranging from ecological agriculture to wildlife biology and dietetics and nutrition. Internationally recognized for research that advances knowledge and solves problems related to agriculture, food and the environment, the Faculty’s world-class researchers investigate fields as diverse as crop science, animal welfare, parasitology, food safety and nutrition. They develop strategies to feed the growing world population while preserving our environment, and pioneer technologies to produce biofuel, advance precision farming, and explore how bacteria can survive in polar regions.

About the Margaret A. Gilliam Institute for Global Food Security

Based at the Faculty of Agricultural and Environmental Sciences, the Margaret A. Gilliam Institute for Global Food Security serves as a nexus for broad-based Canadian and international actions to monitor trends in agriculture and food production, along with the external drivers of climate, world markets, commodity prices, changes in land use, water resources, energy, labour and agricultural inputs. The Institute leverages the Faculty's established strengths in agriculture, nutrition, environment, water, biodiversity, plant and animal science, parasitology, microbiology and food science, and draws upon McGill’s interdisciplinary expertise related to food security – including medicine (epidemiology, toxicology); food safety law; international studies and development; health management; sustainable development law; geography, anthropology; economics, and sociology. This allows it to offer diverse teaching and research programs and investigate long-term solutions for sustainable food production.