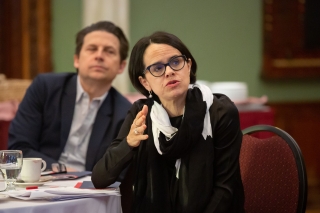 September 6, 2022 | The Royal Society of Canada (RSC) announced 102 new Fellows and 54 new Members of the College of New Scholars, Artists, and Scientists. Among the 2022 cohort are fifteen McGill researchers and scholars, including eleven RSC Fellows and four new Members, who will be inducted at the RSC Celebration of Excellence and Engagement on November 25, 2022, in Calgary, Alberta. The newest McGill cohort will join 238 McGill researchers who are currently RSC Fellows and Members of the College and 2400 Canada-wide.

One of the new fellows is core Max Bell School faculty member Jennifer Welsh: Professor, Department of Political Science, Faculty of Arts; Canada 150 Research Chair in Global Governance and Security; Director of the Centre for International Peace and Security Studies (CIPSS). Jennifer was previously Professor and Chair in International Relations at the European University Institute (Florence, Italy) and Professor in International Relations at the University of Oxford, where she co-founded the Oxford Institute for Ethics, Law and Armed Conflict. From 2013-2016, she served as the Special Adviser to the UN Secretary General, Ban Ki-moon, on the Responsibility to Protect.