The Pandemic and the Future of Liberty: Accelerated Transition to the Digital World or Threat to Human Rights? 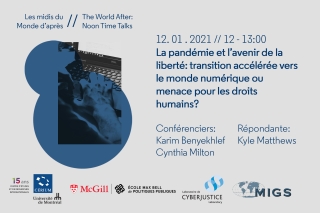 In this, the third in a series of events about the world after COVID-19, Les midis du Monde d’après, Karim Benyekhlef, Cynthia Milton, and Kyle Matthews will be discussing the potential post-pandemic ramifications that COVID-19 will hold for personal liberties and human rights. This bilingual event is hosted by the Max Bell School of Public Policy, Laboratoire de cyberjustice, the Montreal Institute for Genocide and Human Rights Studies, and the Centre d’études et de recherches internationale.

Karim Benyekhlef has been a professor in the Faculty of Law at the Université de Montréal since 1989. He has been seconded to the Centre de recherche en droit public since 1990 and served as its Director from 2006 to 2014. He was also the Director of the Regroupement stratégique Droit, changements et gouvernance (Strategic Law, Change and Governance Group), which brings together some 50 researchers, from 2006 to 2014. At the same time, he was the Scientific Director of the Centre d’études et de recherches internationales de l’Université de Montréal (CÉRIUM – the Université de Montréal’s International Research and Study Centre) from 2009 to 2012. He is now the Director of the Cyberjustice Laboratory, which he founded in 2010. The Cyberjustice Laboratory has obtained in 2015 the award «Mérite Innovation» from the Bar of Quebec (Innovation Award). He holds the Chaire de recherche en information juridique Lexum (Lexum Research Chair on Legal Information) and serves as a member of CÉRIUM’s science and advisory committees. He received in 2016 from the Bar of Quebec the distinction Advocatus Emeritus. He holds the 2019-2020 Alexandre Koyré Excellence Research Chair. He is the co-leader of the research group Law, cyberjustice and cybersecurity at OBVIA (International Observatory on the Social Impacts of AI and Digital Technology). Read more.

Cynthia Milton (PhD, Wisconsin) directs the Canada Research Chair on Latin American History. Analyzing both traditional and new methods of resolving conflicts by "saying the truth," she studies the Peruvian regions strongly affected by the Shining Path. Her present research centers on the works of art produced following a period of violence. She presently holds an Alexander Von Humboldt Research Fellowship (2011-2014) for experienced researchers. She is the Director of the Chair in Contemporary Mexican Studies (CEMC) and the Research Network on Latin America (RÉAL). Read more.

Kyle Matthews is the Executive Director of the Montreal Institute for Genocide and Human Rights Studies (MIGS) at Concordia University. He joined MIGS as Lead Researcher of the Will to Intervene Project in 2008 and was appointed Senior Deputy Director in 2011. At Concordia he founded the Raoul Wallenberg Legacy of Leadership project as well as the Digital Mass Atrocity Preventing Lab, which works to counter online extremism and study how social media platforms are being used as a weapon of war.