International Migration after COVID-19: A Dilemma between Security and Citizenship? 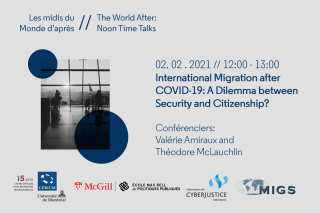 In this, the fifth in a series of events about the world after COVID-19, Les midis du Monde d’après, Valérie Amiraux and Théodore McLauchlin will be discussing what international migration will look like after COVID-19 and whether countries will face a trade-off between security and citizenship rights. This bilingual event is hosted by the Max Bell School of Public Policy, the Université de Montréal, the Centre for International Peace and Security Studies, and the Centre d’études et de recherches internationale.

Valérie Amiraux is a full Professor of Sociology at the University of Montreal, where she holds the Canada Research Chair for the Study of Religious Pluralism. Her main fields are religious pluralism, Muslim minorities, and discrimination. Her current research interests centre on an ethnographic analysis of the articulation between pluralism and radicalization, with a special emphasis on the interaction between majority societies and Jews and Muslims as minorities in specific cities of Europe and Canada. Her most recent publications include Parisian Muslims, OSF Report, 2012; "Radicalization and the Challenge of Muslim Integration in the European Union" (Handbook of Political Islam, Routledge, 2012); "Religion and Political Sociology" (Blackwell Companion of Political Sociology, Willey-Blackwell, 2012); and "Crisis and New Challenges? French Republicanism Featuring Multiculturalism" (European Multiculturalisms: What Went Wrong? Zed Books, 2010). Read more.

Theodore McLauchlin is an Assistant Professor in the Department of Political Science at the Université de Montréal, and Deputy Director of the Center for International Peace and Security Studies (CEPSI). He earned his doctorate from McGill University in 2013. A researcher in the field of security and international and internal wars, he is particularly interested in the organization and political life of military forces, both state and non-state. He holds a Social Sciences and Humanities Research Council grant for his work titled "When Soldiers Rebel: State Berakdown and Army-Splinter Wars." His research has been featured in the Journal of Conflict Resolution, Comparative Politics, et Conflict Management and Peace Science. Read more.