A discussion with Canada's Ambassador and Permanent Representative to the United Nations in New York, Bob Rae 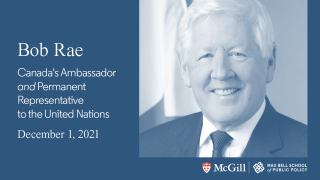 In conversation with Max Bell School professors Andrew Potter and Jennifer Welsh, Ambassador Rae will discuss the challenges confronting multilateral institutions as they seek to address global problems, the impact of COVID-19 on development and prosperity, and Canada's current goals and priorities at the UN.

Bob Rae is the Ambassador and Permanent Representative of Canada to the United Nations in New York.

As a lawyer in private practice, Mr. Rae led the restructuring of the Canadian Red Cross, the Toronto Symphony Orchestra, and chaired the board of the Royal Conservatory of Music. He also wrote “Lessons to be Learned” on the Air India bombing, and “Ontario a Leader in Learning” - a study of the Ontario higher education system. He was also named to the Security and Intelligence Review Committee by then Prime Minister Chrétien.

Mr. Rae’s return to Parliament for the constituency of Toronto Centre in 2008 led to his appointment as Foreign Affairs spokesman for his party, and to his election as interim Leader in 2011. Between 2013 and 2020 he taught law and public policy at the University of Toronto, and was a partner and senior counsel to the law firm OKT LLP, specializing in indigenous law and constitutional issues.

Mr. Rae is a Fellow of the Forum of Federations (an organization he co-founded in the 1990’s), Massey College, and the Raoul Wallenberg Centre for Human Rights. He served as the Chief Negotiator for the 9 First Nations that are members of the Matawa Tribal Council in Northern Ontario between 2013 and 2018.

In October 2017, Mr. Rae was appointed as Canada’s Special Envoy to Myanmar. In this role, he engaged in diplomatic efforts to address the crisis in the country’s Rakhine State and wrote the report “Tell Them We’re Human” in 2018. In March 2020, he was named by Prime Minister Trudeau to be Canada’s Special Envoy on Humanitarian and Refugee Issues. This led to his report “A Global Pandemic Requires a Global Response”, which was made public shortly before his appointment as Ambassador to the UN.

Bob Rae is a Privy Councillor, a Companion of the Order of Canada, a member of the Order of Ontario, and has numerous awards and honorary degrees from institutions in Canada and around the world. In addition to several government reports, he is the author of five books. Along with music, reading, and writing, he loves tennis, golf, and fishing. He is married to Arlene Perly Rae, writer and public advocate on issues affecting women and children. They have three daughters and five grandchildren.