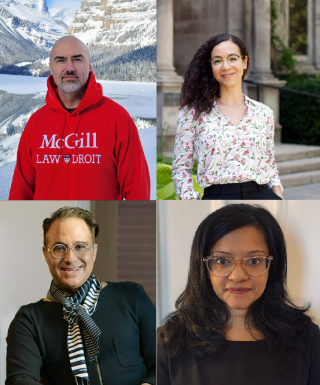 The Faculty of Law is delighted to announce that it will welcome four new members in the 2021-2022 academic year.

The Faculty of Law had previously announced that Professor Darren Rosenblum will be joining McGill on 1 August 2021.

“These gifted and energetic scholars will move us closer towards our aspirations for an integrated, deeply pluralist approach to legal teaching and research,” said Dean Robert Leckey. “Given faculty- and university-level commitments to Indigenous legal education and to combating anti-Black racism, I welcome the arrival of colleagues with contributions to make in these areas.”

Priya S. Gupta is a Senior Wainwright Fellow at McGill’s Faculty of Law. She is a professor and faculty director of the General LLM Program at Southwestern Law School, where she has taught property, public international law, law & development, and critical race theory. She conducts research in financial capitalism and cities, property law, and race. She recently served as visiting faculty at King’s College London and Osgoode Hall Law School. Prior to joining Southwestern, Gupta was assistant professor and (founding) co-director of the Centre for Women, Law, & Social Change at the Jindal Global Law School in Delhi NCR, India. She holds a PhD in Law from the London School of Economics. Before teaching, she practiced law in the structured finance & derivatives group of Linklaters LLP.

Sarah Riley Case (formelly Mason-Case), LLM’13, is completing her SJD at the University of Toronto, where she is a Trudeau Foundation doctoral scholar. She is a Fulbright visitor at Harvard Law School's Institute for Global Law and Policy. Her thesis traces how people of the Third World sought to address the novel problem of climate change during the “decolonization era” by matching a representation of nature (as a commons) with their aspirations to rebuild international law to achieve racial, political, and economic justice. She aims to develop research connected to history, repair, justice, race, legal theories, the natural world, law reform, art, and international and domestic law.

Joshua Nichols’ scholarship centres on the constitutional relationship between Canada and Indigenous peoples. In particular, he is interested in how the notion of Crown sovereignty has become entangled with the Westphalian model of the state. His research considers how concepts such as sovereignty, federalism, and constitutional law were shaped and reshaped during the close of the so-called Second Empire, and how these are carried over into the formation of modern international law from the League of Nations and, finally, to the United Nations. Nichols holds a PhD in law from the University of Victoria as well as a PhD in philosophy from the University of Toronto. He comes to McGill from the University of Alberta.