Academic Renewal at the Faculty of Law 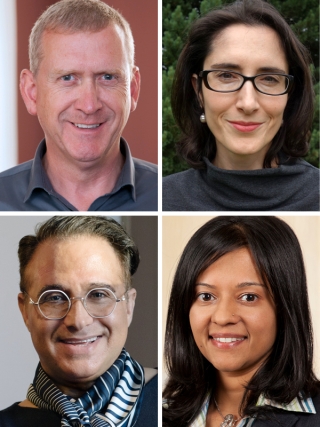 The Faculty of Law is delighted to announce the appointment of three professors and a visiting scholar for the year 2020–2021. Professor Peer Zumbansen will join the Faculty as a full professor and the inaugural incumbent of the Faculty of Law’s Professorship in Business Law, starting 1 January 2021. Dr. Alicia Hinarejos and Professor Darren Rosenblum will join as full professors, effective 1 January 2021 and 1 August 2021 respectively. Professor Priya Gupta will begin a one-year term as a Senior Wainwright Fellow on 1 August 2020, during which she will teach a course on Critical Race Theory.

“We are thrilled that these accomplished scholars will join the Faculty in 2020–2021, two of whom we welcome back as valued colleagues and teachers,” said Dean Robert Leckey. “The appointment of Professor Peer Zumbansen as inaugural incumbent of our philanthropically funded Professorship in Business Law marks an milestone for the Faculty of Law’s distinctive integrated approach to teaching and researching law; I look forward to his leadership in developing our efforts in this area and connecting them to those in practice.”

Peer Zumbansen is an internationally renowned scholar of private law whose work focuses on contract law, corporate governance, and transnational regulatory theory. He is a professor at Osgoode Hall Law School in Toronto, where he held a Canada Research Chair from 2004 until 2014. He founded and directed the CFI- and SSHRC-funded Critical Research Laboratory in Law & Society and the Collaborative Urban Research Laboratory, and launched the SSRN e-journal for the Comparative Research and Law & Political Economy Network (CLPE). From 2014 until 2018, he served full-time as the inaugural Chair in Transnational Law at King’s College London and the inaugural director of the Dickson Poon Transnational Law Institute. Educated in Frankfurt, in Paris, and at Harvard, Professor Zumbansen is the recipient of two teaching awards from Osgoode and the Province of Ontario, as well as the university-wide Teaching Innovation Excellence Award from King’s College.

About the Faculty of Law’s Professorship in Business Law

The Faculty of Law’s Professorship in Business Law was created through generous philanthropic support from a group of eminent alumni committed to encouraging and supporting McGill Law’s contributions in the field of business law, notably corporate law, securities law, and entrepreneurship. The holder of the Professorship will contribute to the Faculty’s distinctive and integrated, transnational approach to legal research and teaching. They will develop an overall vision of the Faculty’s teaching in business law and will endeavour to serve as a liaison between the Faculty and leading practitioners in Montreal and around the world. The Professorship has an initial term of five years.

Alicia Hinarejos is an expert in the field of EU law and comparative public law. She is currently a University Senior Lecturer and a Fellow of Downing College, University of Cambridge. She taught at McGill as a Boulton Junior Fellow and assistant professor, from 2009 to 2011. Before that, she was a British Academy Postdoctoral Fellow at the University of Oxford and a William Golding Research Fellow at Brasenose College, Oxford. She holds a DPhil from Oxford, where she also received an MPhil and an MJur in European and Comparative Law. Dr. Hinarejos has published widely and advised UK and EU institutions in her areas of expertise. Her work on Economic and Monetary Union has been cited approvingly in the most significant judicial decisions in this area in recent years by the Court of Justice of the EU and the German Federal Constitutional Court. Her research has attracted awards from various institutions, including the AHRC, the British Academy, the European Central Bank, and the Alexander von Humboldt Foundation. She is Joint Editor of the European Law Review.

Darren Rosenblum’s scholarship focuses on corporate governance, in particular on diversity initiatives and remedies for sex inequality. They are a professor at the Elisabeth Haub School of Law at Pace University, where they teaches Contracts, Corporations, and International Business Transactions, and serves as faculty director of the Institute for International and Commercial Law. Darren Rosenblum clerked in the U.S. District Court of Puerto Rico (1996–98) and practised international arbitration at Clifford Chance and Skadden, Arps, Slate Meagher and Flom (1998–2004). Professor Rosenblum has served as a visiting professor at Sciences Po Law School in Paris, Brooklyn Law School, American University, and Seattle University. They have presented their pioneering work on corporate board quotas in English, French, Spanish, and Portuguese. In 2018, he served as Wainwright Senior Fellow at the Faculty. In 2011, as a Fulbright Research Scholar in France, they performed a qualitative study on the French quota for women on corporate boards, which was subsequently presented at the French National Assembly.

Priya S. Gupta is professor and faculty director of the General LLM Program at Southwestern Law School, where she teaches Property, Public International Law, Law & Development, and Critical Race Theory. Her research is in financial capitalism and cities, property law, and race. She recently served as visiting faculty at King’s College London and Osgoode Hall Law School. She currently serves on the board of Parkdale Neighborhood Land Trust in Toronto. Prior to joining Southwestern, she was assistant professor and (founding) co-director of the Centre for Women, Law, & Social Change at the Jindal Global Law School in Delhi NCR, India. She received a B.A. in Economics from the University of North Carolina in Chapel Hill, a MSc. in International Political Economy from the London School of Economics and Political Science, and a JD from New York University School of Law. After graduating from NYU, she practised law in the structured finance & derivatives group of Linklaters LLP.