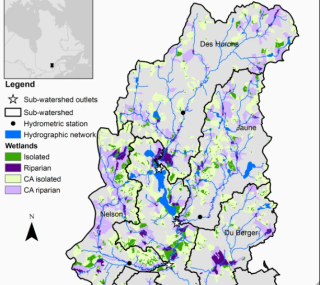 How much wetland we should protect or restore is not a simple question, such that conservation targets are often set according to political agendas, then standardized globally. However, given their key regulating hydrological functions, wetlands represent nature-based solutions to the anticipated, exacerbating effect of climate change on drought and flood events, which will vary at the regional scale.

In a new study, researchers from the Quebec Centre for Biodiversity Sciences propose a science-based approach to establishing regional wetland restoration targets centered on their hydrological functions, using a case study on several sub-watersheds of a northern temperate basin in south-eastern Canada.

The abstract reads: "We posit that restoration targets should minimally mitigate the negative effects of climate change on watershed hydrology, namely peak and low flows. We used a semi-distributed hydrological model, HYDROTEL, to perform a hydroclimatic assessment, including 47 climate projections over the 1979–2099 period, to test the effect of wetland restoration scenarios on peak and low flows. The results showed that hydrological responses to climate change varied among sub-watersheds (even at the scale of a relatively small region), and that, to mitigate these changes, increases in wetland coverage should be between 20% and up to 150%. At low restoration levels, increasing wetland coverage was more effective in attenuating floods than alleviating droughts. This study indicates that a no-net-loss policy is insufficient to maintain current hydrological cycles in the face of climate change; rather, a ‘net gain’ in wetland cover is needed."