Parents and sleep: The struggle is real... and long

Every new parent knows that their sleep suffers when they have children, and there’s evidence that may not get better for a while. But maybe that’s ok.
Gaia Remerowski, MS, Science Journalism | 8 Feb 2021
Contributors
General Science

There used to be a time when I not only fell asleep quickly, but I stayed asleep the whole night. I used to tell people “I excel at sleeping.”

Then my daughter was born.

From the first terrifying night in the hospital after giving birth – when I awoke each time she stirred, certain she was going to suffocate – to today, when I jolt awake at her 3-year-old midnight cries, sleep has been a struggle.

We all know losing sleep is not good for the body. There’s plenty of research linking poor sleep to conditions such as obesity, depression, heart disease, diabetes and more. And we can’t really blame babies for sleeping so poorly. After all, in their early days, infants can’t tell the difference between night and day and they need to eat often. But new parents also have a lot on their minds, which adds even more to their lost z’s. Losing sleep due to a new baby can also lead to postpartum depression and that depression can, itself, lead to loss of sleep. So it’s a vicious cycle.

Take-home message:
- It’s clear sleep suffers in parents, particularly in the first year of an infant’s life, and it may not get better for many years, so it is important to make sleep a priority
- Sleeping through the night for an infant (defined as 6 to 8 hours of uninterrupted sleep) doesn’t occur as frequently by six months of age as we might hope
- Sleep is variable in children (and in adults), and sleeping through the night in infants should be thought of as more of a process than a milestone

When does it get better?

Unfortunately, the news doesn’t get better as our kids get older. A study of 2541 women and 2118 men in Germany showed sleep satisfaction and duration sharply declined with childbirth and did not recover in either group for up to six years after birth. The effects on sleep were more pronounced in first-time versus experienced parents. The struggle seems to be the worst for first-time mothers, who said they slept an average of an hour less in the first three months after giving birth compared to before they were pregnant. Fathers said they slept about 15 minutes less compared to pre-pregnancy. Six years later, mothers still reported sleeping about 20 minutes less than before pregnancy and fathers said they remained at 15 minutes of sleep deprivation.

There are some drawbacks to the study. Like much sleep research, this study was based on self-reporting, which can bias the data. And the researchers only collected the data once a year for six years. I’d like to know what happens after six years. What about when your kids become teenagers?

Sleeping through the night takes time

So when is your child “supposed” to start sleeping through the night? There, too, the news isn’t great. Pediatricians generally define a full night’s sleep as six to eight continuous hours, and tell parents not to expect this of their child until at least six months of age. And maybe not even then, according to a study led by Marie-Hélène Pennestri, an assistant professor in the Department of Educational and Counselling Psychology at McGill University. Her research showed that among 44 six-month-old infants, sleeping patterns varied greatly during a two-week period, with half the mothers reporting that their infants never slept eight consecutive hours and 20% reporting their infants didn’t even sleep six consecutive hours.

Parents also shouldn’t worry that a lack of sleep is affecting their baby’s health. In another study led by Pennestri of almost 400 six-month-old and year-old children, the researchers showed no association between interrupted sleep and later cognitive or physical development problems.

Pennestri says her research has shown her that sleeping through the night clearly can take longer than six – and maybe even 12 – months in some babies. “Let’s lower parents’ expectations and view sleep as a developmental process, and let’s stop comparing infants,” says Pennestri. “We know there’s variability among infants when it comes to sleep. There is also variability from night to night, and this is totally normal.”

Sleep is variable... for everyone

So what’s a tired parent to do? First off, know that you are not alone. And it’s not just parents whose sleep suffers. “Sleep evolves as you age,” says Pennestri. In every new decade of your life there are major changes to your sleep quality and quantity.

New moms are often counseled to “sleep when the baby sleeps.” I found this highly unrealistic. When would I ever eat, shower or keep any semblance of order in my life or house if I slept when my daughter did? But you do need to make sleep a priority: Nap if you can, go to bed early, the dishes (and scrolling on your phone) can wait. And definitely take that friend or family member up on babysitting, whenever possible. I found switching off nights that my husband and I are “on-call” helps. That means I can get at least some periods of uninterrupted sleep. The uninterrupted part is important for going through all the stages of sleep, which has benefits such as clearing toxins from the brain and consolidating memories.

One thing you can do to get your baby to sleep is pick a routine and stick with it - whether that’s a bath before bedtime, cuddling in a chair, singing songs or something else that works for you. Consistency and routines do seem to help encourage sleep in young children. But take it from me: Keep it simple. Don’t get in the habit of reading five books and singing nine songs, like we have, because that can really draw out bedtime. But ultimately, it seems like the best advice is not to stress too much about any of this, because it’s not worth losing any more sleep over.

How much sleep do we actually need? 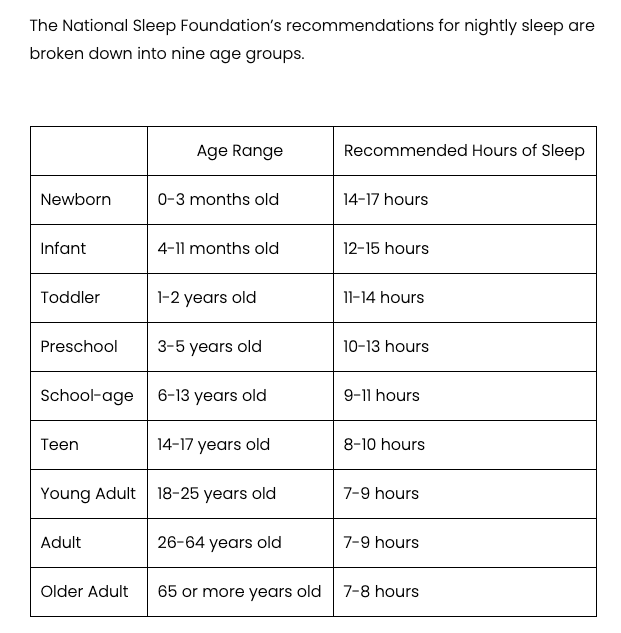 Gaia Remerowski is a senior content strategist at Washington University School of Medicine in St. Louis. Her interest in science communication began during her undergraduate studies working as an intern for the McGill Office for Science and Society, where she learned that you don’t have to settle for just “doing science,” you can also tell engaging stories about it.

Do our brains see what our eyes see?

Luciferin and GFP: The Fluorescent Chemicals Used by Insects, Sea Creatures and Humans!