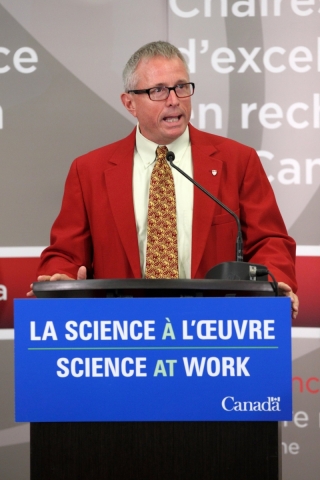 The new Chair was announced at McGill today by Senator Larry Smith, on behalf of the Honourable Ed Holder, Minister of State (Science and Technology).

This is McGill’s second CERC. The first, Dr. Luda Diatchenko, Canada Excellence Research Chair in Personalized Pain Medicine, was announced in September 2013. With this announcement, there are now 21 chairs in place at 15 universities across the country.

“We are delighted to welcome Professor Robin Rogers, an internationally recognized leader, to Montreal and to our university,” said Suzanne Fortier, Principal and Vice-Chancellor of McGill. “Professor Rogers is a trailblazer and role model for the next generation of researchers, developing sustainable biomaterials that are positive for the environment and the economy. McGill has long pioneered in a range of green chemistry-related research, including the development of inherently safer solvents for chemical reactions and processes. Professor Rogers will spearhead efforts to redesign chemicals, materials, and manufacturing technologies to prevent pollution and save energy.”

Prof. Rogers said he is eager to help build on McGill’s outstanding strength in new, green manufacturing technologies.  “McGill is the best place in the world to be working to take sustainable technology to fruition,” he said.

Under the CERC Program, the university will receive up to $10 million in funding from the federal government over seven years to support Prof. Rogers and his team’s ambitious research program. In addition, funding for research infrastructure will be provided by the Canada Foundation for Innovation, the government of Quebec, and McGill to make available advanced equipment and modern laboratory space, valued at over $10 million.

Since its launch in 2008, the CERC Program has positioned Canada as an international leader and destination of choice for research and development, and continues to attract and retain world-leading researchers.

To learn more about Green Chemistry at McGill: https://www.youtube.com/watch?v=4PYxs8KBBHQ

For more information about the CERC program: http://www.cerc.gc.ca/home-accueil-eng.aspx

Link to the Government of Canada’s announcement