What the “fecal prints” of microbes can tell us about E

Making the most of a shitty situation 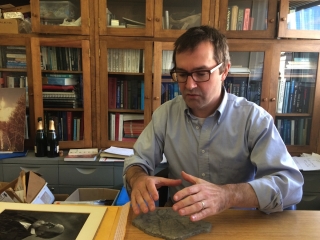 Everything that eats must excrete, and microbes are no exception.

Microbes have dominated the Earth’s ecology for at least the past 3.5 billion years. They play a vital role in the planet’s carbon cycle by digesting organic matter. So their waste potentially carries information about how the planet’s temperature, greenhouse gas composition, and even oxygen levels have changed over time, along with information about how life itself has evolved to accommodate these changes. But though scientists have been trying to grasp how to interpret the information from these microbial “fecal prints” for more than sixty years, the solution has proved to be elusive until now.

In a paper recently published in the Proceedings of the National Academy of Sciences (PNAS), researchers from McGill University and Israel’s Weizmann Institute of Science describe a new technique they have developed to interpret these distinctive metabolic traces. They chose to focus on the microbes that live on the ocean floor where the microbes consume the sulfate found in seawater because oxygen is in short supply.

Global temperatures, carbon dioxide concentrations, and oxygen levels all determine whether these sulfate-using microbes are living in times of plenty, and growing fast, or in times of need, and growing slowly. The record of these changes is to be found in the microbial wastes and more specifically in how much, or how little, of the sulfate compound the microbes trim off.

The microbes are ultra-picky diners. Like many humans, they prefer to keep their consumption light. And just as careful carnivores will trim the fat from the edge of their steak, these microbes tend to reject sulfur if it is just a neutron or two heavier than normal. (Neutrons are atomic particles, and so are very, very small.)

In times of plenty, as growth speeds up and the microbes need to take in more sulfate they are less discriminating and will trim off, or “fractionate” less. Like a glutton is wolfing down a slab of roast beef, they don’t spend time cutting off the fat. But in times when resources are more limited, as growth slows down, microbes trim off or fractionate more.  It’s like dining with a freegan who insists on trimming off the rank exterior of an expired rump roast to find the single unspoiled piece of meat inside.

The new research by Boz Wing and Itay Halevy explains these peculiar dining preferences for microbes and, for the first time, links it to how much of what they consume is stored inside their cells. Although the “fecal print” analysis was developed for the sulfate-reducing microbes found under the seabed, as Wing’s co-author Halevy of points out, the new work has larger implications. “It can be applied to many other microbial metabolisms that are important to earth system functioning today, from the denitrifiers that drive Earth’s nitrogen cycle to the microbes that produce the greenhouse gas methane.”

Wing credits a sharp McGill undergrad with asking the question that inspired this research.  “When I started at McGill I told an undergrad that we were going to grow some microbes in the lab to see how they fractionated, so that then we could look for this as a bio signature in some wicked old rocks,” says Wing. “She gave me a super skeptical look and asked if I knew that microbes evolve. That fundamental question is now behind the majority of the research in my lab, where we are trying to understand ever-evolving relationship between our planet and its microbial majority.”