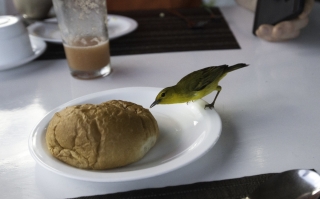 Wild populations must continuously adapt to environmental changes or risk extinction. For more than fifty years, scientists have described instances of “rapid evolution” in specific populations as their traits (phenotypes) change in response to varying stressors. For example, Spanish clover has developed a tolerance for copper from the mine tailings in which it grows, and the horn size of Alberta bighorn sheep has decreased due to trophy hunting. But until now it hasn’t been possible to reach any overarching conclusions about how different factors (such as harvesting, climate change, invasive species, or pollution) shape this rapid (now called “contemporary”) evolution. Building on earlier work, a McGill University-led team has created a massive new dataset of close to 7,000 examples of changing traits in various populations around the world, from house sparrows and gray wolves to freshwater snails and Canadian goldenrod. The dataset is 80% larger than any that existed in the past and documents trait changes that are a mixture of evolution and immediate (plastic) responses to the environment.

“We have come a long way from the old view of evolution as a slow process to the point where we are now realizing that everything is evolving all around us all the time,” says Andrew Hendry, a Professor of Biology at the Redpath Museum of McGill and the co-senior author on the paper recently published in Molecular Ecology. The researchers were especially interested in how various types of human disturbance influence changes in traits. “We found a small but real difference in rates of change between human disturbed and natural populations,” explains Kiyoko Gotanda, the co-senior author, and an Assistant Professor of Biological Sciences at Brock University where the data is housed. “Moreover, the very highest rates of change are nearly always those associated with intensive human disturbance” adds Hendry.

Pollution has a significant impact on evolution

Analyses of the expanded dataset also confirms that harvesting by humans results in larger rates of change than non-human disturbances, and that introduced populations have increased rates of change. Interestingly, the researchers found that pollution was responsible for the most rapid rate of phenotypic change – with zinc tolerance in tufted hair grass increasing by 80% over 26 years, for example. They also suggest that it is now difficult to judge what is a “natural habitat” since climate change is probably affecting most populations.

“The critical next question is how this contemporary change matters for populations, communities, and ecosystems, as well nature’s contribution to people,” adds first author Sarah Sanderson, a PhD candidate in Biology at McGill. “We know, for instance, that salmon have been getting smaller over the last century. This reduction in body size of such an important fish has huge impacts —birds, bears, and fish now have less to eat, Indigenous people have to catch more fish per meal, and the payoff is lower for commercial fishers.”

“Similar effects must surely attend many of the other trait changes observed in countless organisms across the globe,” adds Hendry.