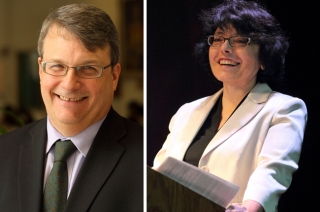 At its Thursday meeting, the Board of Governors approved the appointment of two new Deans in a continuing process of renewal in the senior administration. They are both research scientists with international reputations who have been at McGill for a number of years.

Bruce Lennox, currently Tomlinson Professor of Chemistry and the former chair of the Department of Chemistry will become the new Dean of the Faculty of Science, replacing Dean Martin Grant. He recently completed a year-long term as President of the McGill Association of University Teachers (MAUT).

Josephine Nalbantoglu will become the University’s next Dean of Graduate and Post-doctoral Studies. Since 2009, she has served as the Director of the Integrated Program in Neuroscience, which has over 350 students and 190 supervisors. It is not only McGill’s largest graduate program, but Canada’s largest graduate neuroscience program. She replaces Dean Martin Kreiswirth.

Both will take up their new positions on July 1st, 2015 for five-year terms.

The new Deans are internationally respected researchers who have been widely published in major scholarly journals. Both have made reaching out to the community a key part of their teaching and program development in their respective fields.

Provost Anthony C. Masi, expressed his appreciation for the qualities that the appointees bring to their positions. They were selected following international searches.

Bruce Lennox joined the McGill faculty in 1987. A Fellow of the Royal Society of Canada, Royal Society of Chemistry (UK), and the Chemical Institute of Canada. Prof. Lennox led the renewal of laboratory teaching in the Department of Chemistry and has long been a proponent of increased interdisciplinarity. He has also made a point of providing undergraduates with opportunities to experience research at the laboratory and field course level.

Lennox’s research program focuses on the design and synthesis of nanomaterials, with applications in biophysical devices, “smart” nanocomposites, and biosensors. This research has led to a number of collaborations with biochemists, neuroscientists, pharmacologists, microbiologists, cell biologists, chemical and electrical engineers, and physicists. His research group has been supported by more than $5 million in grants awarded by NSERC, FCAR/FRQNT, CIHR, and CFI, while the various roles he played in a number of research consortia helped bring more than $60 million in funding support to McGill. This latter amount includes funding for research facilities, major instrumentation and the Canada Excellence Research Chair. In all, Prof. Lennox’s research program has produced more than 130 peer-reviewed publications.

Josephine Nalbantoglu is a member of the Department of Neurology and Neurosurgery with affiliations to the Montreal Neurological Institute (the Neuro). She earned her PhD in Biochemistry from McGill in 1984 and returned as a faculty member in 1990 after pursuing research in Montreal, London and Saitama, Japan. A prolific and widely respected researcher, Nalbantoglu has published extensively in leading academic journals and has spoken at academic conferences around the world. She is the recipient of numerous awards.

The major focus of her laboratory at the Neuro has been the study of normal and aberrant gene expression in the nervous system. Nalbantoglu’s team is working to understand the molecular basis of neuropathology as observed in neurodegenerative diseases, as well as to develop therapeutic approaches for muscular dystrophy and brain tumours. She has been funded by the CIHR, NSERC, NCIC, CRS, MDA (USA) as well as the FRSQ as a chercheur-boursier national.

Nalbantoglu also understands the importance of reaching out to the community around the University to share knowledge and understanding. In 2011, she founded a science outreach program called BrainReach/Mission Cerveau that educates young students (in Grades 4 and 9) from economically challenged neighbourhoods in Montreal. Every year, graduate students make eight presentations covering basic neuroscience to elementary school classes and six presentations to high schools. Each presentation reaches between 1,400 and 1,800 students every six weeks.