Tracking down the origins of the Ebola outbreak

In April, shortly after the World Health Organization announced that the Zaire Ebolavirus was responsible for a number of deaths in southern Guinea, an international team began the search for the animal origins of the epidemic. The team wanted to know whether there was a larger Ebolavirus outbreak happening in wildlife in the region and how the index case, a two-year-old boy in Meliandou, Guinea might have gotten infected and sparked the epidemic that has since spread into other areas of Guinea and then Sierra Leone, Liberia, Nigeria, Senegal, the U.S, Spain and Mali, representing the largest ever recorded outbreak. 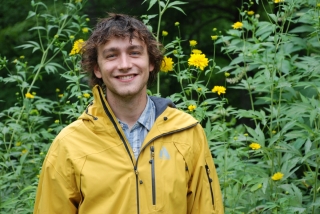 How did you get involved in this study?

As part of my doctoral research, I was already working with Dr. Leendertz, head of the “Epidemiology of Highly Pathogenic Microorganisms” project group at the Robert Koch Institute in Berlin. We’ve been studying primate diseases in the Ivory Coast, everything from retroviruses, like the simian immunodeficiency virus, to anthrax, and even a syphilis-like infection that infects our study group of sooty mangabeys, monkeys that live in large groups in Taï National Park, a species that holds the dubious honor of being the source of HIV-2. Monkeys and apes, in part because they are so closely related to humans, are susceptible to many of the same diseases and in fact many human pathogens have non-human primate origins.

When Dr. Leendertz organized a team last April to look into the Ebolavirus outbreak, I was already in the Ivory Coast, doing fieldwork in one of the largest remaining forests in the region, just a short distance from the Liberian border and a few hundred miles from the index village in Guinea.

What was your role on the team?

In past outbreaks, the Ebola virus has caused major mortality in wildlife, in some cases causing up to 90% declines in great ape populations; these great ape carcasses may have played a major role in allowing the virus to make the jump into human populations, because hunters found and butchered dead animals. So while I was examining the influence of primate behavior on disease circulation, I also sampled dead wildlife to see if Ebolaviruses were what killed them. This sometimes meant learning about a dead animal after a long day of following monkeys and then hiking out late at night to beat the scavengers and flies that can quickly dismantle a carcass. Veterinarian Ariane Düx and I geared up in full protective gear – often in sweltering heat -- and performed necropsies to collect samples to test back in the lab in Berlin. Back in Berlin, I was more heavily involved with analyzing and interpreting the data from all the different specialists and writing the paper together with Fabian Leendertz and Sebastian Calvignac.

What did the wildlife samples show?

Fortunately for the animals in the forest -- and mirroring the findings of the monitoring team led by Vincent Lapeyre in Guinea -- these wildlife samples all tested negative for the virus. In Guinea, the estimates of large mammal densities before and after the outbreak further suggest that there has been no major decline in this region and that there was likely not an “amplifying epidemic” in wildlife in the region.

What led the team to deduce that the epidemic may have stemmed from contact with bats?

Since the monitoring data showed that larger wildlife in the region didn’t experience a recent decline, they seemed unlikely to have served as the source for the Ebola virus disease epidemic. But fruit bat hunting and butchering are common activities in southern Guinea and children are also exposed to insectivorous bats through hunting in and around villages. The bat-surveying team found no fruit bat colonies in the index village in Guinea, but discovered a large burnt tree near the home of the two-year old boy who was the first reported case. Children reported playing in and around this tree, which had burned accidentally on March 24th, shortly before the research team arrived. Luckily the team was able to identify the species of bats that had inhabited this tree by deep-sequencing soil and ash samples. This bat species, Mops condylurus, has been implicated in a previous ebolavirus outbreak, can survive experimental infections, and has even shown hints of antibodies against ebolaviruses in the wild, so they seem the most likely source of the present epidemic.

Now that this project is done, what do you plan to do next?

In the future, I plan to continue researching the influence of ecology and behavior on primate diseases. Like I mentioned, because monkeys and apes are so closely related to us, we can share a lot of diseases. Even looking at humans, it is easy to see that behavior influences how a disease spreads. For example, researchers at Harvard found that more socially connected students get the flu earlier. I am curious how behavior, and also changing behavior due to factors like habitat disturbance and climate change, will influence the evolution and virulence of diseases. I hope to monitor wild populations to see what new diseases might be awaiting human populations that live in close contact to wild primates. I’d also love to work with doctors in the area to see what diseases might have already made the jump. To do this, I am going to have to learn a lot of new lab methods but also spend more time where wild primates live; I think I’ll be heading back to West Africa in the winter or summer before doing some more lab work in Berlin and then working with my advisor, Jonathan Davies, at McGill to finish up my dissertation.

Link to the research paper