Study reveals clues to cause of hydrogen embrittlement 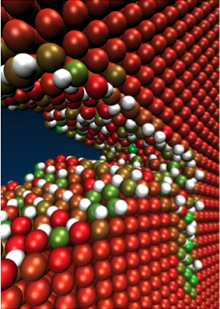 Since the phenomenon was discovered in 1875, hydrogen embrittlement has been a persistent problem for the design of structural materials in various industries, from battleships to aircraft and nuclear reactors. Despite decades of research, experts have yet to fully understand the physics underlying the problem or to develop a rigorous model for predicting when, where and how hydrogen embrittlement will occur.  As a result, industrial designers must still resort to a trial- and-error approach.

Now, Jun Song, an Assistant Professor in Materials Engineering at McGill University, and Prof. William Curtin, Director of the Institute of Mechanical Engineering at École polytechnique fédérale de Lausanne in Switzerland, have shown that the answer to hydrogen embrittlement may be rooted in how hydrogen modifies material behaviours at the nanoscale.  In their study, published in Nature Materials, Song and Curtin present a new model that can accurately predict the occurrence of hydrogen embrittlement.

Under normal conditions, metals can undergo substantial plastic deformation when subjected to forces. This plasticity stems from the ability of nano-  and micro-sized cracks to generate “dislocations” within the metal – movements of atoms that serve to relieve stress in the material.

“Dislocations can be viewed as vehicles to carry plastic deformation, while the nano- and micro-sized cracks can be viewed as hubs to dispatch those vehicles,” Song explains. “The desirable properties of metals, such as ductility and toughness, rely on the hubs functioning well.  Unfortunately those hubs also attract hydrogen atoms. The way hydrogen atoms embrittle metals is by causing a kind of traffic jam: they crowd around the hub and block all possible routes for vehicle dispatch. This eventually leads to the material breaking down.”

State-of-the-art computer simulations were performed by Song to reveal explicitly how hydrogen atoms move within metals and how they interact with metal atoms. This simulation was followed by rigorous kinetic analysis, to link the nanoscale details with macroscopic experimental conditions.

This model has been applied to predict embrittlement thresholds in a variety of ferritic iron-based steels and produced excellent agreements with experiments.  The findings provide a framework for interpreting experiments and designing next-generation embrittlement-resistant structural materials.

The research was funded in part by the Natural Sciences and Engineering Research Council of Canada,  the U.S. Office of Naval Research and by the General Motors/Brown Collaborative Research Lab on Computational Materials.

IMAGE: Computer simulation shows the surfaces of a microscopic crack in metal. The white atoms accumulated around it are hydrogen.