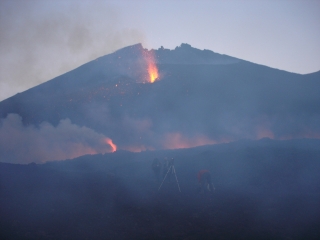 While scientists don’t yet fully understand the mechanisms that control whether an eruption is large or small, they do know that eruptions are driven by the rapid expansion of bubbles formed from water and other volatile substances trapped in molten rock as it rises beneath a volcano. The mechanism is much the same as that involved in shaking a bottle of a carbonated drink and then opening the lid.  Whether the volcano or the drink erupts dramatically or slowly loses its gas depends on the interplay of bubble growth and gas loss. Investigating the formation and growth of bubbles and their effects on magma properties thus provides a key to understanding volcanic eruptions, and could lead to better predictions of their scale.

An international research team led by Prof. Don R. Baker of McGill University’s Department of Earth and Planetary Sciences has published a new study in Nature Communications that suggests the difference between a small or large eruption depends on the first 10 seconds of bubble growth in molten rocks. The findings point to a need to develop volcanic monitoring systems that can measure rapid changes in gas flux and composition during those brief, crucial moments.

The researchers examined the growth of volcanic bubbles in real time by heating water-bearing molten rock with a recently developed laser heating system at the Swiss Light Source facility in Villigen, Switzerland, where they could perform three-dimensional X-ray microtomography (CAT scans) of the samples during the first 18 seconds of bubble growth and foaming.  With these images, the researchers were able to measure the number and size of bubbles, investigate the geometry of the connections between bubbles, and calculate how quickly gas flowed out of the sample and how the foam strength dropped.

The researchers found that initially thousands of small bubbles per cubic centimetre formed, trapping gas inside them, but that they swiftly coalesced into a foam of larger bubbles whose strength rapidly decreased while the rate of gas loss increased.  All of these changes occurred within the first 15 seconds of bubble growth. They then determined which conditions of bubble formation and growth lead to failure in the rock.

From these results, Baker and his team hypothesized that even molten rocks with small amounts of water have the potential to create devastating, large eruptions.  In most cases gas escapes rapidly enough to outpace bubble growth, resulting in smaller eruptions; but under exceptional rates of bubble expansion, or conditions where the bubbles cannot coalesce, large eruptions may result.

The findings represent a small but important step toward the goal of being able to predict the type of eruption that will occur in various volcanic regions of the world.  “Future work will need to concentrate on the first few seconds of bubble growth and the effect of crystals on the bubble growth,” Baker said.

Co-authors of the study are Francesco Brun, of Universita' degli Studi di Trieste in Italy; Lucia Mancini of Elettra - Sincrotrone Trieste; Cedrick O'Shaughnessy, a former McGill master’s student; Julie L. Fife of the Swiss Light Source at the Paul Scherrer Institut; and Mark Rivers of the University of Chicago.

Funding for the study was provided by the Natural Sciences and Engineering Research Council of Canada and the Swiss Light Source.

To view the paper, visit: http://www.nature.com/ncomms/journal/v3/n10/full/ncomms2134.html