The spiders who came in from the cold 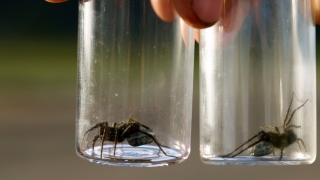 A sprawling study of spiders across northern Canada has turned up more than 100 species in provinces or territories where they had never before been recorded. The findings, by researchers from McGill University, provide a valuable new benchmark for monitoring biodiversity across Canada’s vast northern expanses.

Using traps to sample 12 selected sites from Labrador to the Northwest Territories, McGill PhD student Sarah Loboda and Prof. Chris Buddle collected 23,000 adult spiders representing more than 300 species. Their findings, published Sept. 20 in the Canadian science journal FACETS, could help scientists track the effects of climate change in the Far North, which is expected to be disproportionately affected by global warming. Ground-dwelling spiders are among the most diverse and abundant animals in the northern tundra. They are key predators of other insects; and they, in turn are prey for insect-eating birds that breed up north. “We can’t begin to track effects of climate change without first knowing what species live where, Buddle says. “This is what our work did.” “Our work also showed that the Arctic Islands have a distinct community of spiders on them – different from the mainland,” Buddle notes.“This has important conservation implications: we must pay attention to our most harsh, northern ecosystems when thinking about conservation of biodiversity.” The study was part of the Northern Biodiversity Program– a project that spanned several years and focused on collecting insects and spiders from across northern Canada. It was inspired by the Canadian Northern Insect Survey, conducted from the 1940s to the 1960s, and the researchers returned to many of the same sites to collect samples.

Funding for the study was provided by the Natural Sciences and Engineering Research Council of Canada.